The Albany and Schenectady Jewish Community Centers in August sent 12 athletes and two artists as a joint delegation to the 2019 JCC Maccabi Games and Arts Fest in Detroit, Mich. The teens accomplished 12 medals (2 gold, 3 silver, and 7 bronze). 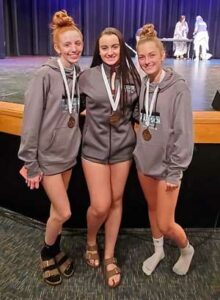 The Games and Arts Fest began with opening ceremonies at the Little Caesar’s Arena with a Parade of Athletes and Munich 11 tribute. During the Games teens competed and participated in the JCC Cares mitzvah projects during the day. Arts Fest teens were involved with workshops with professionals from the arts fields and then presented a showcase of talent during the Thursday of the Maccabi week. Evening social activities were also held.

Approximately 1,600 Jewish teens from the United States, Mexico, Canada, Israel, Central America, and Europe participated at the Detroit JCC Maccabi Games and Arts Fest this year, the 37th year of the Games in the U.S.

Next summer the JCC Maccabi Games and Arts Fest will be held in San Diego from Aug. 2 to 7, and then Aug. 9 to 14 for the Games at Pace University in NYC. Eligible Jewish teen athletes ages 13-16 or artists ages 12-17 are invited to join the local Maccabi Games experience.