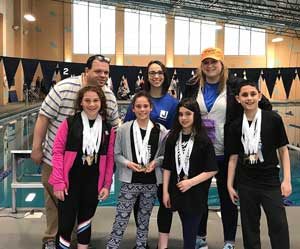 SCHENECTADY– The Schenectady and Albany Jewish Community Centers teamed up to send 20 athletes, coaches and delegation heads to participate in at the Mid-Atlantic Mini and Junior Maccabi Games in Philadelphia on May 5 at the Kaiserman JCC. Athletes ages 9-12 years old tested their skills in swimming, soccer and basketball at the one-day Olympic-style sporting competition.

Overall, 925 athletes and coaches participated this year, representing regions as far north as Albany and Schenectady and as far south as Washington, D.C. The Games consisted of round-robin style tournaments for each sport followed by a single elimination medal round. Athletes participating in swimming earned a combined 17 medals, coming in fifth place overall, while the mini girls’ soccer team received the silver medal.

“We are so proud of our athletes that performed at this competition and had the opportunity to come together with other Jewish athletes to show their sportsmanship and create new relationships,” said Schenectady JCC Interim Executive Director, Andy Katz.

The Mini and Junior Maccabi games not only feature athletic competitions but also provide various social opportunities for participants to build relationships with teammates and athletes throughout the Mid-Atlantic region. Athletes from the Schenectady and Albany JCCs joined teams 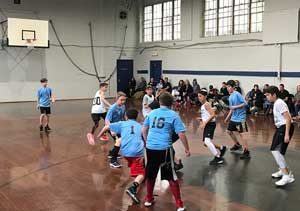 from other delegations as well, including teams from Long Island, Baltimore and Westchester.

A Chicago couple lives like Orthodox Jews —but are Christians
The winners and losers of Israel’s 2019 Eurovision Song Contest seem to have a good time!