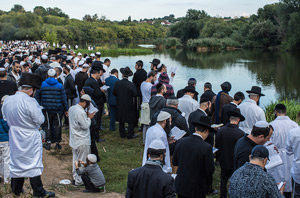 JERUSALEM (JTA) — Some 2,000 people planning to travel from Israel to the Jewish pilgrimage site in Uman, Ukraine, for Rosh Hashanah were swindled out of about $1.3 million.

Three people were recently arrested in connection with the scheme, Ynet has reported reported. They are accused of fraud, money laundering and forgery.

The suspects, all 29, sold the airline tickets to unsuspecting pilgrims and then canceled the tickets a day before the flights were scheduled to leave.

Two of the suspects owned the Europnim travel agency. They told their customers that their tickets were invalid because the agency had been the victim of a scam. The agency said that it would refund the travelers’ money.

Most of the victims of the fraud were haredi Orthodox.

At least 30,000 Jewish pilgrims are expected to travel to Uman to celebrate Rosh Hashanah at the burial site of Rabbi Nachman, an 18th-century luminary buried there. Rabbi Nachman during his lifetime had called on his followers to be with him on Rosh Hashanah.