DC Report
By Douglas Bloomfield
The real problem with elections in this country is not that so many ineligible people are voting but that so many eligible citizens can’t.

Voter fraud is virtually nonexistent in this country, according to the Brennan Center for Justice at NYU School of Law, a nonpartisan authority on voting rights and practices, and multiple media investigations. The real offenders are those who falsely make fraud charges to mask their own efforts to limit access by those they fear will vote against them.

Administration Efforts
President Donald Trump set up a commission to “expose” the problem, led by a notorious advocate of voter suppression, to validate his complaint that the only reason he lost the 2016 popular vote was three-to-five million illegal immigrants voting for Hillary Clinton. It was a lie and he knew it, and his bogus commission folded after producing bupkis.

The most serious incident of election fraud in recent years was produced last year by a Republican congressional campaign in North Carolina’s 9th District. The bipartisan State Board of Elections threw out the results and ordered a new election.

Trump and Republicans, unencumbered by facts, have led the voter suppression crusade. It is an attack on the fundamentals of democracy that reflects a lack of confidence in their party’s message and candidates. 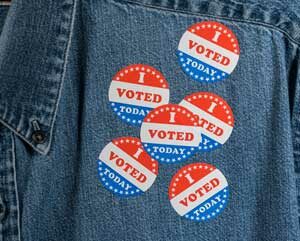 “Power Grab”
Senate Majority Leader Mitch McConnell (R-KY) believes the lower the turnout the better for Republicans because it means fewer poor, minority, immigrant and young voters would go to the polls. He opposes legislation to make Election Day a national holiday, calling it a “power grab” by Democrats because more people would vote.

He may have a point. Last year’s high turnout that gave Democrats control of the House is cited as proof.

Their goal, wrote Washington Post conservative blogger Jennifer Rubin, is “anti-democratic” and designed to get “a whiter, more conservative electorate.” As a result, Republicans have “morphed into the party of white grievance, xenophobia and racism.”

Some states, mostly blue, have been adopting measures to expand access to the polls through improved voter registration opportunities, early voting, expanded hours and access to polling places, restoring voting rights to those released from incarceration, improved access for those with disabilities, and liberalized absentee-voting,

Jewish groups—including the Jewish Social Justice Roundtable, the National Council of Jewish Women, the Jewish Council for Public Affairs, the Anti-Defamation League and the Reform Movement’s Religious Action Center – are among the leaders in expanding voting rights, participation and protection of civil liberties.

GOP Motivation
One motivation behind intense GOP anti-immigration measures is not that new immigrants will vote, because they can’t and don’t, despite Trump’s false charges, but that their American-born children will.

A new AP/MTV poll shows only one in three Americans between 15 and 34 approve of President Trump, compared to about 39 percent of their elders. They consider him to be “a racist,” “generally dishonest” and “mentally unfit.”  By two-to-one and more they differ with Trump and Republicans on health care, climate change, immigration and student debt refinancing.

Ellen Weintraub, Federal Election Commission chairwoman, has repeatedly debunked Trump’s claims of “massive voter fraud,” essentially telling him to put up or shut up. He has done neither. After Trump said that he would welcome dirt from foreign entities on his opponents — he actually solicited it —she reminded him, “It is illegal for any person to solicit, accept, or receive anything of value from a foreign national in connection with a U.S. election.” That didn’t stop him either, and it has become the heart of the Congressional impeachment investigation.

Russian Influence?
The Mueller Report warned that Russians and others continue trying to influence our election. But there is little evidence that this administration takes that seriously, and U.S. intelligence agencies are hamstrung by a president who has been more inclined to trust Vladimir Putin’s word than theirs.

Senator McConnell earned his moniker “Moscow Mitch” by blocking meaningful legislation to strengthen U.S. election security.  He also rejects any need for federal-level comprehensive election security, arguing that is the job of the states, where erecting vote barriers has proven easier, particularly in trifecta states.

Voter intimidation, scaring voters to stay away from the polls, is a tool used by those most afraid of free and fair elections. Autocrats like Vladimir Putin use it at home and, according the Mueller Report, tried to export it abroad, especially to America, where he could help his admirer Donald Trump.

If Republicans are so terrified of free and fair elections that they obsess with rigging and suppression, they’re in the wrong country.

Anti-Semitism’s resurgence; Does the three headed dragon in the U.S. threaten liberal democracy or just all Jews?
An acknowledgement of libraries and the role  they’ve played in the life of this bibliophile