Will you be shicker on Purim or just drunk with happiness? 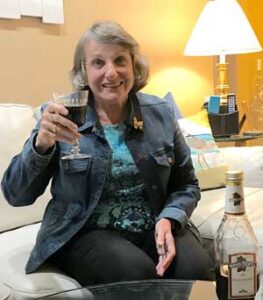 Marilyn Shapiro (aka Sister Frangelica) hones her drinking skills to ready for Purim. Narishkite! She does, however,  wish everyone a L’Chaim on the holiday and much joy.

By MARILYN SHAPIRO
Purim is around the corner, and not far behind are costumes and dancing and Purim shpiels and groggers and hamantashen.

And, for some, alcohol.  According to the Talmud, it is one’s duty, to “make oneself fragrant [with wine] on Purim until one cannot tell the difference between Haman and Mordecai.”(Babylonian Talmud, Megillah 7b).  On this one holiday, alcohol is not the most important element, but many imbibe. As explained by writer Tvi Freeman, Purim is not about drinking. It is about being drunk with happiness. That, despite Haman’s attempt to annihilate the Jewish people, Jews stood up to evil and won. Rational? Logical? No, but we managed to survive.

Purim Prize
Getting physically drunk on Purim has not been one of my memories. I always have tied the holiday to children and often, at least in my synagogues, some kind of cheesy fair that involved parent-made booths and dime-store prizes. The first adult Purim party I attended was one held by the Capital District Jewish Singles on March 18, 1973, where I met my husband Larry. That was the best prize I could have won. And that party, held in the second floor of Herbie’s Restaurant, did not involve alcohol either.

Jews drink a glass of wine on Shabbat, the number goes up to four on Passover. Some drink on Simchat Torah. Copious alcohol consumption though was never a “Jewish” thing. In fact, statistically, Jews have less of a chance of becoming alcoholics than other demographics.

Genetics And Culture
Why? The first reason is genetics. According to a 2002 study done at Columbia University, many Jews — nearly 20% — have a DNA mutation linked to lower rates of alcoholism. The variance, say scientists, known as ADH2*2, is involved in the way the body breaks down alcohol in the bloodstream and is thought to produce more of a toxic chemical by-product when persons with the gene drink heavily.

Another reason is culture. In a 2014 article in Sh’ma: A Journal of Jewish Ideas, alcohol counselor Lew Weiss writes that while many Jewish traditions involve alcohol, Jews condemn actual drunkenness. The fear of being ostracized by their peers results in fewer Jews with drinking problems. And if they do drink too much, they are less likely to  “come out of the closet.”

A third reason deals with the Jews’ drink of choice. In a 1980 study at Syracuse University, Jews tend to drink wine, more often than any other group and —at least 40 years ago few alcohol abusers concentrated on wine.

Encounters With Alcohol
While growing up in upstate New York, I rarely saw my parents or relatives drink alcohol. Family gatherings never included beer, hard liquor, or even wine. To this day, I can’t even remember if we kept beer in the refrigerator, but we must have. When I was 12, my father asked me to get two beers for him and a friend who was visiting. I grabbed the bottles from the fridge, filled up two tall glasses with ice, and watched in horror as the Schlitz or Genesee foamed all over the counter. Hey! That’s what we did with soda, right?

Two of my family stories involve my mother’s unknowing encounters with alcohol. In 1955, my mother, who was five months pregnant with my younger sister, drank several glasses of what she thought was a delicious red fruit punch at a local Kiwanis get-together. When the president asked everyone to rise for the pledge of allegiance, my mother stood up, put her hand over her heart, and promptly fainted. She came to on a couch with our family doctor who was fortunately in attendance, by her side.  “Young lady,” said Dr. Temple sternly, “you should not be drinking so much alcohol, especially in your delicate condition!”

The second story came from my mother and father’s decision to follow Uncle Paul’s recipe for cherry brandy. As the big jar of the fresh fruit soaked up the vodka/sugar mixture, my mother helped herself to one or two of the cherries the first day, three or four the next, six the next. That night, father came home to dinner and a very tipsy wife. “It’s just fruit!” she cried. No more cherries for my mother!

Learning Experiences
Like my mother, I naively fell prey to another “delicious red fruit punch. I started Albany State (now the University at Albany) one week after my 18th birthday and had no experience with recreational drinking. (Yes, I was a total tea-totaler/good girl throughout high school.) On my first date, my older companion, an exchange student from Russia, recommended that I order a Singapore Sling. Two tall glasses of the sweet mixture of cherry brandy, gin, and fruit juices put me on my proverbial tushie. From then on, I stuck to less potent combinations.

Another of my learning experiences occurred after I graduated college. In June 1973, I attended my cousin Marsha’s wedding in Richfield Springs. I was getting over bronchitis and took my dose of cough medicine with codeine with breakfast. Six hours later, after the long drive and the wedding ceremony, I quickly downed two alcoholic drinks from the open bar on an empty stomach. Were they screwdrivers? Whiskey sours? It didn’t matter. The combination of booze and codeine resulted in a giant hangover that left me in bed in the dark with cold compresses on my head for two days. I stupidly hadn’t realized the danger of mixing prescription drugs and alcohol, Years later, I found out such a toxic combination put Karen Ann Quinlan into a coma and subsequent vegetative state that triggered the historic right-to-die fight that ended up in the Supreme Court.

Give Me Ice Cream!
Larry and I enjoy a glass of wine or beer—Guinness or Sam Adams for Larry and a Blue Moon with a slice of orange for me. To be honest, I think I enjoy the citrus more than the beer. We have also relax a bit on vacation—especially at the all-inclusive resort we used to visit in Jamaica. At Grand Lido Braco, I discovered a wonderful hazelnut liquor, and enjoyed it so much that I earned the moniker “Sister Frangelica” from my fellow Caribbean travelers. At Grand Lido Negril, Larry and a friend discovered chocolate martinis, which he refers to as  “chocolate milk for adults.”

The Carribbean influence shows up in another one of our favorites: coconut rum and Coke. For the most part however, mixed drinks especially ones loaded with sugar, are wasted on me as I drink them too fast. I’d rather put those calories towards a huge dish of vanilla ice cream. Frequently, my version of a “strong drink” is a glass of club soda with lemon and lime and two maraschino cherries—but not the kind my mom had!

On the evening of March 14, our congregation is having a Purim party. There will be costumes and dancing and a Purim shpiel and groggers and hamantashen. No alcohol, though, just soda and some ice tea. I know that no one will even notice or care. We will be drunk with happiness that Jews, despite all of those who have tried to annihilate us, have survived.

Forget Super Tuesday. It’s the Day After That Matters.
No need to make Purim a whole megillah! Simple and savory treats to give out as gifts this holiday