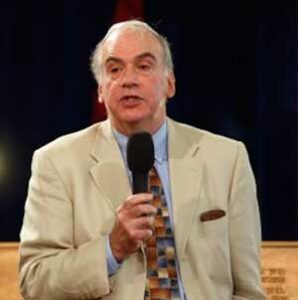 SCHENECTADY– Jack Mintzer, Congregation Agudat Achim’s director of education and programming announces a series of six lectures featuring Dr. Stephen Berk, scholar-in-residence at Agudat Achim for over 30 years.  Berk’s newest lecture series, “The American Jewish Experience: Zion In America,” will be offered online only. Dates of the lectures are Thursdays, Sept. 17, 24, Oct. 1, 8, 15, and 22 at 7:30 p.m.

Berk is a professor of history at Union College in Schenectady and is the Henry and Sally Schaffer Chairman of Holocaust and Jewish studies. He is also the recipient of the Florence B. Sherwood Chair in History and Culture and a consultant to the Wiesenthal Holocaust Center. He has lectured on the Holocaust at  higher education institutions such as Princeton University, Vanderbilt University, The University of Texas at Austin, and Williams College. In addition, he has lectured extensively in the former Soviet Union, Israel, Egypt, and Poland. Berk is the author of Year of Crisis, Year of Hope: Russian Jewry and the Pogroms of 1881-1882 and articles on Russian history, Russian-Jewish history, anti-Semitism and American policy in the Middle East. A native of New York City, Berk received his bachelor’s degree in history from the University of Pennsylvania, his master’s degree from the University of Chicago, and his doctorate from Columbia University.

1. From Iberia to America: They met with George Washington, fought in the American Revolution and began to create a Jewish community. They came for freedom and helped build a new country.
2. The Germans Are Coming: Developments in Central Europe motivated tens of thousands of Jews to come to the United States where they revitalized a small Jewish community.
3. The Russians Are Coming: A Russian word enters the English language. The word is “pogrom.” Pogrom became synonymous with attacks on Jews. In 1881-1882, a wave of pogroms swept over Russia, and 1,500,000 Jews came to the United States.
4. The Roaring Twenties and Dismal Thirties: An interwar period that had an enormous influence on American Jewish life. A Jewish infatuation with an American president failed to yield a positive result.
5. A Golden Age for American Jews Part I:The post-World War II period ushered in an unprecedented time in Jewish history. Jews became part of the American mainstream.
6. A Golden Age for American Jews: Part II—Assimilation and the unexpected rise of anti-Semitism cast a shadow over a polarized Jewish community.

Information on how to register is on the congregation’s Facebook page at https://www.facebook.com/CongAgudatAchim. The series is $60 for congregants and $72 for non-members. Organizers request that everyone in a household who will be watching the lectures be registered. Checks may be sent to Jack Mintzer, Congregation Agudat Achim, 2117 Union St., Schenectady, NY 12309. Checks should be made payable to Congregation Agudat Achim.