A clear and present danger, but not obvious to some…

DC Report
By Douglas Bloomfield
All you need to know about the chances for serious infrastructure legislation this year was revealed in a seven-word boast by President Trump hours after signing the massive tax cut bill. Speaking to a group of well-heeled friends at his luxury Florida resort, Trump proudly announced, “You all just got a lot richer.”

“Entitlement Reform”
With so much money going into the pockets of the wealthy —Trump personally will reportedly save tens of millions in taxes as a result of his favorite new law —there just isn’t enough for repairing the nation’s dangerously deteriorating infrastructure.

That’s good news for conservatives like House Speaker Paul Ryan (R-Wisc.), who sees the misnamed tax “reform” and the inevitable explosion of the deficit as an opportunity to slash programs he doesn’t like. No sooner had the tax bill passed than he said the deficits it will cause must be offset by entitlement reform. That’s a euphemism for cutting Social Security, Medicare, Medicaid and welfare —something candidate Trump promised would be untouchable — and turning as much as possible over to the states that can’t possibly make up the shortfall.

Ryan is trying to dress up “entitlement reform” as “deficit reduction legislation,”’ which appeals to Republicans on just about everything except raising taxes on their wealthy contributors.

How Serious Is Trump?
Infrastructure will be high on the agenda when Trump meets Congressional leaders to plan this year’s legislative agenda, but that may be more theoretical than real. He is touting it as the best chance yet for bipartisan cooperation, but it is uncertain how serious he is.

There is a broad national consensus on the need to fix the nation’s crumbling roads, bridges, railways, tunnels, seaports, airports, transit systems and much more. But that doesn’t mean anything serious will be done this year.

Proposal Is Secret
Casting giant shadows over the prospects for bipartisan support is the fact the administration’s infrastructure proposal is being drafted in secret, not in cooperation with Democrats whose votes Trump will need. There is the bigger question of how to pay for it. What we’re hearing from GOP leaders could be the deal killer.

Ryan and Senate Majority Leader Mitch McConnell (R-Ken.), who were oblivious to the huge costs of the tax bill, suddenly became deficit hawks once that bill was signed.

Ryan has been looking for this opportunity for years. He is cool to federal investment in infrastructure and, as with the social safety net, feels those are responsibilities best left to the states and the private sector.

The leadership’s biggest problem may be its own troops. Republicans are not likely to want to face voters this year when their majorities are on the line and explain to constituents why cutting their Social Security and Medicare was a good idea. 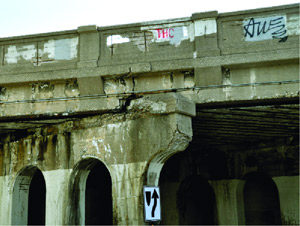 A crumbling railroad bridge that has experts worried at the prospect of heavily laden oil tankers going over it.

methods, reported The Hill. That would include loan guarantees, federal tax credits and other incentives.

Democrats will fight Republican plans to spend large amounts of tax dollars to create profit-making assets for private businesses. They have little confidence that Trump, with his business reputation for stiffing his own contractors and workers, would hold the corporations responsible for making promised improvements

Trump has said infrastructure repair should be “the easiest of all” to achieve, but he typically speaks in broad topic sentences and, as someone typically more interested in bragging rights than results, leaves the details to others. He has said he plans to introduce legislation this month, or at least talk about it in his January 30 State of the Union address. He is more likely to offer talking points and broad goals than any comprehensive plan.

What He Says; What He Does
As with so many issues, what Trump says and does can be very different. He has stopped an Amtrak upgrade in the New York-New Jersey area, cut $96 billion from the Highway Trust Fund, eliminated water resource programs and is talking of privatizing the air traffic control system.

There was no credible need for cutting taxes for Trump and his wealthy friends. But there is an urgent need to repair the nation’s deteriorating highways, bridges, railways, dams, tunnels, seaports, airports, transit systems and water and sewage systems.

A major investment in infrastructure will do more than repair these deteriorating national assets; it will also create jobs, spur economic growth and bring efficiencies to business and industry. A major, federally funded infrastructure push would do far more to spur growth than a massive tax cut for the wealthy.

We have the cheapest gasoline —and the biggest cars — in the world; a small increase in the gas tax would go a long way toward fixing America’s roads and bridges. Yet Republicans leave the impression that they would prefer to see the infrastructure deteriorate and people get injured and killed rather than raise revenues to protect and defend their constituents.

Is Congress Blind?
The anti-tax mentality is anti-American when it says it is more important to cut taxes for the 1 percent than protect the health and safety of the 99 percent.

Ray LaHood, the former Republican congressman who was transportation secretary in the Obama administration, puts responsibility for the dangerous deterioration of infrastructure on his former colleagues on Capitol Hill. “Our infrastructure is on life support right now,” he said. “Politicians in Washington don’t have the political courage to say, ‘This is what we have to do… They don’t really have a vision of America the way that other Congresses have had a vision of America.”

The failure to invest in repairing the rapidly deteriorating national infrastructure is a clear and present danger to tens of millions of Americans every day, almost as dangerous as shredding the social safety net to pay for big tax cuts for the very wealthy.