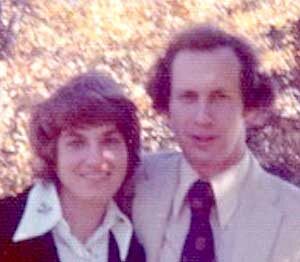 By MARILYN SHAPIRO
The High Holidays are a special time, but it is even more special when family—and a little romance—are part of the season.

In 1951, my future husband Larry’s father Ernie, a World War II veteran, was called back into the U.S. Army. Larry’s mother Doris, along with Larry and Larry’s older sister Anita, moved from Schuylerville, to Syracuse, her hometown, to live with her mother Rose and brother Asher during Ernie’s deployment.

Holiday Dining
Larry, who turned three shortly after their move, remembers riding the family coal truck with his uncle Asher and tagging along with Bubbie when she went to her card games. Relatives and friends, filled the house, including at meal times, as Bubbie was a wonderful cook.

This was particularly true during the Jewish holidays, a tradition that continued even after Ernie returned home. Doris, Ernie, Anita, Larry, and later Marilyn and Carole would pile into the car before each holiday to share huge meals around a crammed dining room in the flat on Jackson Street.

By the time Larry had completed his bar mitzvah, making the huge dinners for the entire family for High Holidays become too much for Bubbie Rose. Doris took over the responsibility for not only the meals but also for opening up her house to friends and family. Doris spent weeks preparing the food, and the table showed it. Matzah ball soup, chopped liver, brisket, chicken, kishki, potatoes, kugels, several vegetables, honey cakes—it was a feast that was repeated on the evening before the Kol Nidre. Then Doris would outdo herself with the Break Fast.

One Particular Year
The 1973 High Holiday season stands out in my memory. In March 1973, Larry and I met at a Jewish singles Purim party. We both knew fairly quickly that the connection that we made over hamantaschen was special. We dated throughout the summer, and six months after our Purim meeting, we were both ready to commit. On a beautiful Indian summer day Larry took me to romantic overlook at the Saratoga National Battlefield. As he was about to pop the question, he got stung by a bee. Man plans; bees sting. Oh well! Larry felt terrible, but I was clueless.

Rosh Hashanah fell only a few days after the bee debacle. Larry and I had turned down offers for a ride home from services. While walking home, Larry talked hypothetically about where we would live, how many children we’d like, and our future dreams. I finally kiddingly asked him if this was a proposal. He said, “Soon.”

A Secret Present
When we got to Larry’s house, we said hello to the family who were about to sit down for dinner. Larry and I went into a bedroom to drop off Larry’s tallit and my purse. Larry said, “Will you marry me?” I said yes. We 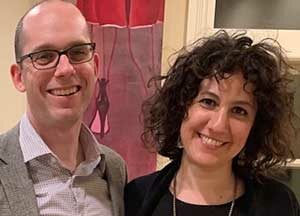 started to kiss when Corky, the Shapiro’s wire-haired terrier, jumped up and licked my face.

As I wiped Corky’s saliva from my lips, Larry and I made a pact: We would keep our engagement a secret. Larry’s father’s birthday was on Yom Kippur. We would announce our engagement at the Break Fast.

The next week went by slowly, especially for me. I wanted to shout our news from the rooftops. After Yom Kippur services ended, Larry and I called my parents tell them of our engagement. We then sat down with Larry’s family for the Break Fast dinner.

We brought out dessert and birthday cake. Ernie blew out the candles and opened a couple of presents. Then Larry was ready for our big announcement.

“What?” said one of his sisters. “Another stupid tie?”

“No,” said Larry. “I am giving you a new daughter-in-law. Marilyn and I are engaged!” Everyone was thrilled. My now future father-in-law would regard it as one of his best presents ever.

Larry and I were married on Sept. 8, 1974. A few weeks later, we attended High Holiday Services with Larry’s family. After the last shofar blast we went back to the Shapiros for their annual dinner, a tradition we maintained for almost 20 wonderful years.

When Larry’s parents passed away only eight months apart in 1994, Larry and I hosted a Rosh Hashanah dinner at our home in upstate New York and continued to do so for over 20 years until we moved to Florida. Since our move we have shared Rosh Hashanah dinners with our friends at each other’s homes and our Break Fast with our fellow worshippers in the synagogue.

Another Holiday Romance
This year, the High Holidays are about creating new memories and celebrating another romance. On a visit from his home in San Francisco this past January, our usually reserved son told us that he was “kinda sorta seeing someone.” It was a woman whom he had taken out for a Chinese food on Dec. 25. As Larry and I had similarly experienced many years before, Sarah and Adam both knew fairly quickly that the connection that they had made over fortune cookies was special. They dated throughout the winter, and after only six months after their Asian dinner, they were both ready to commit. On a beautiful summer’s evening, Adam took Sarah to a romantic overlook in Bernal Heights. Fortunately, no bees ruined their moment. Adam proposed. Sarah accepted! They were engaged!

Adam and Sarah will be getting married in San Francisco in October 2019, on the same day as the 46th anniversary of the day Larry and I announced our engagement and what would have been Ernie’s 100th birthday. Life has come full circle.

After the wedding, Larry and I will remain in San Francisco to attend Yom Kippur services with Sarah, Adam, and Sarah’s parents, Carol and Dick. The six of us will share a pew in the synagogue. After the last shofar blast, we will go to Sarah’s parents’ house for their annual Break Fast, an event that will include Dick’s Grandma Minnie’s blintzes.

“As we now prepare for this time of reflection, renewal and rebooting of our spiritual lives,” read the couple’s invitation, “ we wish you L’Shanah Tovah Tikatevuh!”

And we wish our newlyweds-to-be —much health, love, and happiness.

One year since the Pittsburgh attack a ‘Pause with Pittsburgh’ set; ADL requests 11 actions
After Netanyahu fails to form a government, mandate passes to Gantz