A Jewish woman’s stabbing in Sweden shocks her tiny community 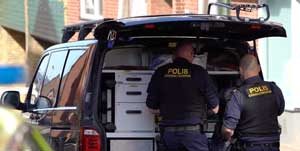 Police at the scene of the crime in Helsingborg, May 14, 2019. Screenshot courtesy of Aftonbladet.

By CNAAN LIPHSHIZ
(JTA) — Early Tuesday, May 13, a man wielding a large knife approached the secretary of the Jewish community of Helsingborg, Sweden, from the back and delivered near-fatal stab wounds to her upper body.

The victim, a woman in her 60s whose family asked not be named in the media, was assaulted a mere stone’s throw from the tiny synagogue of this coastal city just north of Malmo. Her attacker fled the scene, which was near the victim’s home, as she cried for help from passersby. She was taken to the hospital in critical condition.

Motive Unknown, But?
The motive for the assault on the woman on her way to work was not immediately clear, police told the Swedish media.

This did not stop speculation and conflicting reports from circulating in the media.

The Helsingborgs Dagblad, a major local newspaper, reported unattributed information that the incident “seems to be an act of insanity where the woman was randomly targeted.” A suspect has been identified and an arrest warrant issued, the report said, but he is wanted for attempted murder —suggesting the assumption of criminal responsibility.

Israel’s president, Reuven Rivlin, meanwhile linked the assault to anti-Semitism when he wrote in a statement that it “reminds us that we cannot rely on fading memories of the Holocaust to keep today’s Jewish communities safe.”

The victim, who was conscious when she was taken to hospital, did not immediately indicate whether her attacker said anything to suggest that the incident was a hate crime, a source who spoke to the woman’s husband told the Jewish Telegraphic Agency.

Area Known For Violent Crime
Southern Sweden has some of the country’s highest level of violent crime. It also has a disproportionate anti-Semitism problem, in which the region’s 1,200 Jews encounter dozens of hate crimes annually —figures that rival the anti-Jewish hate crime statistics recorded in Stockholm, where most of Sweden’s approximately 20,000 Jews live.

Swedish Jews have reported intimidation and violence by far-right nationalists. But in the country’s south, many of the violent incidents – including the hurling of firebombs at the Gothenburg synagogue in 2017 – have come from immigrants from Arab or Muslim countries.

The Helsingborg Jewish community, a tight-knit group of fewer than 100 that increasingly over the past two years has operated independently from Malmo —has experienced some of that hostility.

Recently, a Helsingborg imam, Samir El Rifai, was indicted in local court for calling Jews “offspring of apes and pigs” during a July 17 sermon at an anti-Israel protest in the city’s Gustav Adolf square. The trial, which has been reported on in the national media, was the result of a complaint filed by the former leader of the Jewish community of Helsingborg.

In 2009, during Israel’s war against Hamas in Gaza, the Helsingborg synagogue was the target of an arson attack. Police did not catch the perpetrators.

Bias Rampant
“Anger. To prevent writing something I will later regret, I restrain myself,” one of the members of Helsingborg’s Jewish community wrote on Facebook. “Our friend is alive. That’s the most important thing,” he added before asking readers to pray for the victim. Like several others from his congregation, the member who wrote the post declined to be interviewed.

“There is shock, confusion and a lot of fear in the Jewish community of Helsingborg,” Rabbi Shneur Kesselman, the Chabad movement’s emissary to the Malmo region, told JTA.

In Malmo, Kesselman personally has witnessed and experienced hundreds of anti-Semitic incidents, most of them verbal and almost all from immigrant families from the Middle East, he said. About a third of Malmo’s population of 350,000 people are first- or second-generation immigrants from the Middle East, with large contingents from Iraq and Syria, according to Swedish government statistics.

“The reality in Helsingborg is not that far from the one in Malmo,” Kesselman said.

Police have beefed up their presence around Helsingborg’s synagogue and around Jewish institutions in Malmo.

Anti-Israel Guise
Amnon Tsubari, a Malmo-based dual citizen of Israel and Sweden who on occasion has served as cantor at the synagogue, said, “It’s more or less the same situation all over Sweden. The attacks are disturbing, shocking, but not surprising.”

Particularly in Sweden, he said, “there is a growing tendency, encouraged by some officials, to bundle Jews and Israel together, and then pretend opposition in Sweden is about Israel, Zionism — not Jews.”

Reepalu, who left his post in 2013, had blamed the rise in anti-Semitism on Jews and advised them to distance themselves from Israel to remain safe. Hannah Rosenthal, a former U.S. special envoy for combating anti-Semitism, said Reepalu’s words were a prime example of “new anti-Semitism,” wherein anti-Israel sentiment serves as a guise for hatred of Jews.

Tsubari, a father of seven, said that regardless of those developments and what is revealed in the investigation into the stabbing in Helsingborg, “I think the future of my children is in Israel.”