A pandemic anti-Semitism ceasefire? Not a chance. Hamas has since reverted to its usual incitement against Jews. 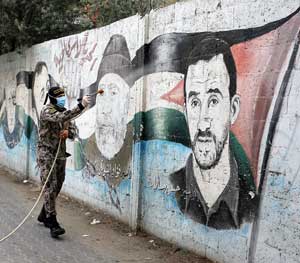 Members of the Palestinian Islamic Jihad’s armed wing, the Al-Quds Brigades, spray disinfectant in the streets of Rafah in the southern Gaza Strip during a campaign aimed to down the coronavirus, March 26, 2020. Photo courtesy of Abed Rahim Khatib/Flash90.

By JONATHAN S. TOBIN
(JNS) – Several weeks ago, something highly unusual happened. The United Nations praised Israel. The cause for this remarkable exception to the general rule of the world body’s Israel-bashing was the cooperation between Israel and the Palestinian Authority in dealing with the coronavirus pandemic. At the end of March, U.N. Secretary General António Guterres praised the way the two parties to the conflict had put aside their differences in their efforts to minimize the spread of the virus between Israel and the territories.

Blaming Israel
But a lot can change in two weeks. Faced with the same daunting challenges that are confounding every other governing authority in the world, the Palestinians have decided that it’s easier to blame their usual scapegoat rather than dealing honestly with the pandemic. Palestinian Authority Prime Minister Mohammed Shtayyeh claimed that “Israeli soldiers are trying to spread the virus on car handles.”

Israel’s Channel 12 reported that this was just the latest in a series of recent acts of incitement on the part of the P.A. in response to the spread of the virus. Rather than acknowledging that the pandemic is a medical problem that transcends the conflict, the P.A. is doing what it always does when faced with a problem that undermines its credibility: It changes the conversation to one about the supposed awfulness of Israel. Indeed, even the P.A. Health Ministry is now listing the cause of all confirmed coronavirus cases as “the occupation state.”

This would be pathetic under any circumstances, but it is particularly troubling while people are dying. Rather than the dealing with an intractable virus that has the ability to resist the efforts of even those governments that were quick to recognize the danger and taking strong measures to contain it—as was the case with Israel—the so-called “moderates” of Palestinian politics prefer to spread anti-Semitic blood libels.

Despite the billions of economic and humanitarian aid that have flowed into both the Fatah-governed West Bank and the Hamas-ruled Gaza Strip, the medical infrastructure of both areas is in bad shape. The P.A. and its leader, Mahmoud Abbas, have siphoned off much of the money via corruption. Hamas spends the money that goes into Gaza on bolstering its ability to commit terror.

With even Israel’s far better run health-care system being strained to exhaustion, the prospect of the virus spreading throughout the territories is a frightening one. But since Palestinian politics has always been about ginning up hatred against Jews and Israel with little or no attention being devoted towards governance, Fatah and Hamas are responding to this public-health disaster by employing their standard hyperbolic mendacity about Israeli perfidy.

Bringing Virus Home
The problem is that now that the Jewish state’s economy is shut down and the entire country put on lockdown during Passover, Palestinians who have been allowed into Israel to work have been streaming back home. As with any group not sheltering in place during the pandemic, some of these migrants are likely to be carrying the virus with them.

Israel donated training and testing kits to the P.A. and transferred $25 million in funds withheld from the Fatah government due to its support of terrorism in order to facilitate its response to the virus. Unfortunately, neither Israel nor the P.A. has enough kits to test all of these workers. Returning Palestinians ought to be instructed to quarantine themselves, but that is probably impossible given their personal circumstances. All the P.A. is reportedly doing about the problem is to spray their clothes and their money with alcohol before sending them home where, alas, some will likely infect their families and neighbors.

While Fatah has reportedly tried to enforce social-distancing measures, it has not merely tolerated, but been responsible for violations such as a mass gathering in Jenin to welcome back a terrorist who had been released from an Israeli jail.

Responsibility For Bias
All of this is tragic, though not Israel’s fault.

The situation calls for more cooperation to mitigate the impact of the disease, and has motivated some to call for increased aid to the Palestinians and the end of the international blockade of the terrorist enclave in Gaza. But since the only way the P.A. or Hamas knows how to respond to problems is to spew invective about Israel, it’s hardly surprising that they would claim that their problems are some kind of Jewish plot. While anti-Semitic conspiracy theories about the crisis being cooked up by crackpot and marginal Jew-haters elsewhere are spreading on the Internet, the difference is that in this case, the Palestinian authorities themselves are playing the anti-Semitism card.

Finding Common Ground?
As in Israel and every other country, many individual Palestinians are stepping up to help others. Still others are trying to reach out by the Internet to ease misunderstandings and find common ground with Israelis. That’s what happened in Gaza where, as The New York Times reported, a small group of Palestinians met to talk about the virus and other issues with Israelis via a Zoom video conference. That might be considered the birth of a peace movement to match the one that has existed for decades inside Israel, only to be undermined and debunked by Palestinian terror and rejectionism.

But the fate of Rami Aran, the organizer of the Zoom talk with the Israelis, was as predictable as it was sad. He hasn’t been seen again since Hamas operatives arrested him. Neither the Times nor any other media allowed to operate in Gaza knows how many other Palestinian participants have suffered a similar fate.

As tragic as its impact has been, the pandemic ought to help convince more people to rise above pointless hatred. But in the case of those who govern the Palestinians, the coronavirus crisis has been business as usual with anti-Semitic blood libels and repression of dissent. Those Americans who think that the situation obligates us to provide more aid for such governments to embezzle and misuse should take note.