A stowaway in the air; a true military story from World War II 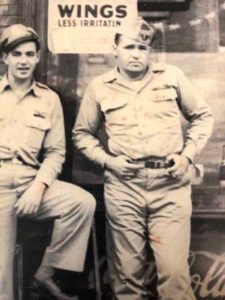 as imagined by grand-nephew

By LANCE ALLEN WANG
As we approach Memorial Day, our thoughts may turn to those who have served, and especially within our community, our Jewish veterans, especially those who have passed. My uncle, known at one time as Lieutenant Julius “Julie” Zlasner, served as a B-17 navigator for 27 missions over the Third Reich and I’m happy to report that he is still among us at the ripe age of 96.  His best friend, who happened to marry Julie’s sister, was once known as Sergeant Sam Robeano, an Army tanker wounded at the Bulge and is now long passed.

Julie inspired me to serve, which I did for 21 years, including a combat tour in Iraq.  Once commonality in my war and his — every now and then something happens which is so out of the ordinary, so incongruent, so seemingly impossible that to see it merely at face value is to sell it short. Sometimes we see them as miracles.  Sometimes we just shake our head. One of those stories of Julie’s war took place in early 1945, on yet another mission.

We join him somewhere over the English Channel…

More than anything else it was the droning of the engines. He heard it in his sleep. He heard it when he was awake – countless hours in the cold sky with the thrumming of the engines and the vibration of the fuselage. He heard it on the ground. He heard it in the air. He had to learn to think with the noise in the background without it lulling him into a trance.  Luckily, he had more than enough distraction to keep him busy. As navigator on the B-17G, Lieutenant “Julie” Zlasner had to spend hours huddled over maps with his compass and pencil, calling out checkpoints over the intercom, plotting courses and giving directions.

Anxiety And Worry
This was not his first mission. That made it easier. It also made it harder. At least if it was his first mission, he could cocoon himself in his own ignorance of what lay ahead. He could be apprehensive about the unknown, but at least it was unknown! With over a dozen missions already under his belt, now he had specific things to worry about. Flak.   Mid-air collisions, like the one over England, which took the life of one of his few friends. And while the bombers finally had fighter escorts capable of taking them all the way to Germany and back, there was still the threat of the Luftwaffe. Luckily, he hadn’t seen a German plane yet. But, he’d seen the other ways to die in the air. “That’s what you asked for,” he thought to himself.  Once he was of age in early ’42 and knew he would be going into the service, he told himself he didn’t want to go into the Navy and drown, and he didn’t want to go into the Infantry and die in the mud. “In the air, — of the war, that is.   The Germans had been turned back at the Bulge.  Bastogne was liberated.  He followed the news on the radio and through Stars and Stripes. The Bulge wasn’t his battle — that was primarily left to the tactical bombers. The bombers of the Zlasner’s 602nd Squadron of the 398th Bomb Group (Heavy) were focused on factories and rail yards far behind the front. However the Bulge became personal when his best friend —and brother-in-law — from back home in Brooklyn, Sam Robeano, now an Army sergeant in the 7th Armored Division, was wounded by shrapnel while bailing out of an M5 Stuart light tank that had been hit by German fire.

A Big Man
Sam was a big guy.  Sometimes, the Army had a sense of humor that way. To look at Sam, you’d have thought there was no way he’d fit in such a small tank, let alone get through the hatch.  Descended from Romanian Jews, Sam was a burly man, but with an equally outsized personality that won him friends easily. He was as gregarious as Julie was introverted. Once Julie found out that Sam had been shipped back to Liverpool, England to recover from his wounds, he took every opportunity to visit Sam at the hospital.

Sam was soon able to visit Julie at his base in Nuthamstead. On his return from one mission, following his post-mission debriefings, a tired Julie shuffled to his quarters to find Sam sitting on his bed, finishing off a box of dried salami and strudel that Julie had just received from home. Crumbs, string, and wrapping from the parcel were scattered around him.  “Look what Adele sent! I hope you don’t mind,” Sam happily mumbled with a mouthful of home-cooked strudel. Adele was one of Julie’s sisters. Sally was another sister, and Sam’s wife.  “Julie stopped himself.  He couldn’t stay mad at Sam. No one could stay mad at Sam. “Hey, I got hungry!” Sam explained, and then laughed out loud with his infectious laugh. Julie couldn’t help but do the same.

Surprise In The Sky
Now, once again crossing the Channel on yet another bombing run, Julie turned his attention back to the business at hand, as the engines’ droning coaxed him back into an almost mechanical efficiency. Julie may not have been the friendliest or most outgoing man, but he was damn good at what he did, he thought. “Navigator to pilot,” he transmitted, “We should be over the coast in approximately two minutes.” He looked out the window.   B-17s filled the sky. Each one with a navigator crammed in the nose, telling the pilot over the intercom that they’ll be over the coast in approximately two minutes.

He sensed a little movement and commotion behind him —sure enough, crawling out from the catwalk over the bomb bays was an oversized man in an oversized flying suit with a portable oxygen bottle in his hand. “Hey good lookin’, come here often?” Sam yelled over the roar of the motors, and clapped Julie on the shoulder. Sure enough, Sam, with his gift of gab, had befriended the enlisted gunners on Julie’s plane and stowed away on this mission.

It took a lot to shock Julie. He’d seen a lot in his life, especially over the last six months. But this left him flabbergasted.   “Sam…  SAM!” he sputtered.  “What the hell do you think you’re doing?   Do you realize what it would do to Sally if we were BOTH killed up here?” Sam gave Julie his usual grin, Julie huffed and hunched over his map. When it came to his job on the Flying Fortress, Julie was all business and had no time for distraction. Sam shrugged, clapped Julie on the shoulder again, and headed to the back of the aircraft.

Back to Business
Julie remembered again his decision to join the Army Air Force and his vision for his own “quick” death. That was for him. Not for Sam. Not for his brother-in-law and best friend. He thought of Sally, and his other sister Adele.   His mom, Sarah. He envisioned not one, but two telegrams. “The Secretary of War regrets to inform you…” The cries, tears, and rending of garments; neighbors bringing his mom and sisters plates of food.  The mirrors covered in a Jewish mourning ritual. He imagined where the flags with the gold stars would be on the window. The dull roar of the engines brought him back to the present.

Julie sat, shook his head, blinked his eyes back into focus, adjusted his oxygen mask, looked at his log, maps and protractors spread out on the small desk in front of him, and glanced up at the handles of his machine gun above his station. If he craned his neck, he could see the shoreline of France approaching. “Sure enough, there’s France…” someone said into the intercom, as foam capped waves from the English Channel crashed onto the French shore.   He checked his watch. Two minutes as he’d predicted, but overall the mission was 18 minutes behind schedule.   Forming up over England took a bit longer than usual due to low clouds and high winds. Luckily they didn’t lose anyone to collisions – this time.   He made sure to make an adjustment on the mission log. He stretched out a cramped leg as hundreds of B-17s continued their flight deep into the fiercely contested, but slowly crumbling shell of Hitler’s “Festung Europa.”

In an unimaginably distant and peaceful future, Sam and Julie would talk about this mission.  The former sergeant would laugh again in that infectious way of his. The former lieutenant would be helpless but to follow suit. But not today. There was a job to do.