A Sukkot message from The Jewish National Fund 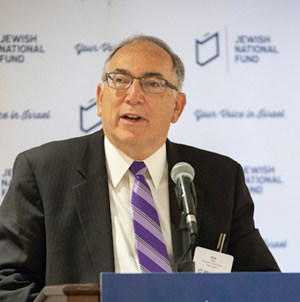 By ROBERT GANZ,
Capital Region JNF board president – Sukkot celebrates agriculture and one of Judaism’s three pilgrimage holidays. It is intrinsically tied to our people’s cultivation of the land of the Israel. That is no easy task in the rugged terrain, which is our homeland, especially in ages past. Today, Israel is a booming country and Northern Israel is witnessing a transformation as global companies are investing in the Galilee’s fertile landscape and the growing Agri-Tech food industry to research and develop new ways to feed the world with better ingredients. Israel is home to 40% of food start-ups in the world.

For the Zionists who 117 years ago created Jewish National Fund (JNF), the events that led them to do so were not very pleasant. The world of the late-19th century was a cool one towards world Jewry and anti-Semitism was rife.

The Power Of An Idea
That rising fervor eventually led Theodor Herzl to the realization that Jews could in fact reclaim their ancient land in Eretz Israel via a national fund of and on behalf of the Jewish people everywhere. “The people,” Herzl said, “will forever be not only the donors, but also the owners of this dedicated capital.”

Soon afterwards, JNF and our iconic Blue Box found its place in nearly every Jewish home on the planet—long before radio, TV or social media could advertise its existence. Such was the power of an idea, the strength of a people’s will…the concept of a dream.

Golden Books were created to inscribe the global record of Jews from across the diaspora who gave whatever they could to plant their way home—if not physically, then with a bit of land, a tree sapling to earmark their spot on the land.

Efforts Of JNF
In 1948, after 2,000 years in exile, Jews returned to the welcome arms of other Jews who had not only formed the government of Israel but ran it—for the first time ever in modern history.  Up until that time, JNF had bought 13% of what was to become the State of Israel, fulfilling Herzl’s mission 47 years earlier. Land that was in the name of the Jewish people everywhere. Land that could never be sold or given away. Land that was as revered to the Jewish people as the sacred birthright Isaac passed down to Jacob.

JNF is providing a new state-of-the-art facility to bring these food start-up companies together in the Galilean town of Kiryat Shmona, just below the Lebanese border. Nearby, in 2019 we are opening the JNF Culinary Institute, a world class cooking school to train chefs. All of this will have a major impact on the region’s economy with good jobs and housing.

While some nations threaten the Jewish homeland, Jews continue to move to Israel in greater numbers every year, and JNF makes that happen with Nefesh B’Nefesh, the aliyah provider.

Trees Grew Tall
We’ve brought over 50,000 new citizens to Israel to make new lives in towns in the Negev and the Galilee; towns we have built or further developed with new infrastructure to carry water and utilities, and paved roads to take little ones to school.

I am so pleased that trees remain our most popular product. Those young saplings that long ago created our Jewish homeland, today stand tall anchored by mighty roots, and serving as the connection between the soil and our people across the globe.

Coins are still deposited in JNF Blue Boxes with a message that continues to ring true and those coins represent the Jewish people’s dream. They are the power of the Zionist movement. They are the proud historic legacy of a nation returned to Zion. Your Israel, forever.

With my warmest wishes to you and your family for a sweet, happy and healthy New Year and a meaningful Sukkot celebration of the harvests we now can enjoy.

These 2 Jewish billionaires love Israel but hate Trump, the president who seems so close to Israel’s government
Had enough sweet stuff at the new year? Here’s a savory meal for Sukkot.