A trove of Nazi-era objects in Argentina stuns investigators 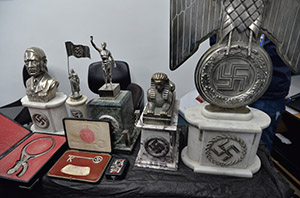 Some of the Nazi-era objects discovered by Argentine police. (Leonardo Kremenchuzky/DAIA)

By JTA staff
BUENOS AIRES, Argentina (JTA)  – A cache of 75 original Nazi objects discovered in June by the Argentine Federal Police has been evaluated as “unprecedented” and “the biggest” discovery of its type.

The objects, discovered earlier this month in a hidden room of a house in the northern part of Buenos Aires included equipment used for Nazi medical experiments during the Holocaust. They were at Interpol headquarters in Lyon, France, Federal Police Commissioner Marcelo El Haibe told JTA.

The police found a bust relief of Adolf Hitler, medical devices marked with swastikas used to measure head and body size, Nazi puzzles for children and knives, among other objects.

How Did They Get There?
“We checked some marks and characteristics, and it is the same object that Hitler holds in his hands in the photo,” El Haibe, a member of Interpol who accompanied the pieces to Lyon, told JTA. “Interpol colleagues from Germany, Israel and United States were surprised by the globally unprecedented discovery. No one has a record of this magnitude a discovery of original Nazis objects, and we have started a collaborative process to search the route of the objects to Argentina.”

According to El Haibe, who also serves as the chief of the Protection of Cultural Heritage department of the federal police, only a very high level of Nazi officer had access to this quality and quantity of objects, and apparently tried to save the objects when the Nazi regime was failing.

Argentine Holocaust Museum Bid
The Argentine Jewish political umbrella DAIA displayed some of the objects at its headquarters in the AMIA Jewish center here. The AMIA building was destroyed in a 1994 terrorist bombing and rebuilt in 1999.

Before receiving an award from DAIA, Security Minister Patricia Bullrich spoke to over 200 attendees crowded in a small room where a sample of the objects were on display. She said her ministry has asked the judge in charge of investigating the discovery that all of the objects be donated to the Holocaust Museum of Buenos Aires, “so that all Argentinians and also visitors who come to Buenos Aires can see this shocking collection.”

Among the attendees were Germany Embassy officials, judges, intellectuals and businessmen, as well as the Jewish philanthropists Eduardo Elsztain and Marcelo Mindlin, who was named recently the president of the Holocaust Museum of Buenos Aires.

“This collection is a great responsibility; we will prepare our site to receive this contribution,” Mindlin told JTA. “There will be a lot of fanatics that will want to enter, there will be people trying to steal objects,” he added, noting that “huge security issues” must be worked out.

In June 2016, a collector from Argentina paid $680,000 for a pair of Nazi-owned underpants and other memorabilia.

Link To Mengele?
“It’s impossible that one collector would have this invaluable amount of original Nazi objects,” DAIA vice president Alberto Indij told JTA. “These [objects] likely belonged directly to Hitler or Joseph Mengele. Someone escaped with all this objects. There isn’t a person that bought all this. No, these were Nazi officers trying to hide and save these objects.”

The magnifying glass and accompanying photo of Hitler were not put on public display, but Indij saw them at Interpol headquarters and confirmed their existence to JTA.

Mengele, a doctor who performed experiments on Jewish prisoners, lived in Argentina for a decade after the war in the same area of Buenos Aires where the Nazi medical tools were discovered. El Haibe said there could be some link between Mengele and the recently discovered tools.

“There are strong coincidences of tools, practices, locations; we are investigating this hypothesis right now,” he said. “But for sure this did not belong to a low-level Nazi follower. This belongs to a very high-level Nazi official who brought them to Argentina.”

Argentina was a refuge for Nazis like Mengele after World War II. Adolf Eichmann was captured in the northern area of Buenos Aires in 1960, and another war criminal, Erich Priebke, also lived there.

A video about the Interpol evaluation, dubbed Operation Near East since many objects of Asian historical significance also were discovered during the raids was released  by the Argentine Federal Police.

The objects were found June 9 following a nine-month police investigation. They are in the custody of the justice who is tasked with investigating the find, who has put a gag order on most aspects of the case.

One suspect identified by the police is not in Argentina. There are Argentine and non-Argentine suspects being investigated, but no further details have been provided. Argentina has had an anti-discrimination law on the books since 1988 that covers the possession and sale of such objects