A year after Charlottesville, the ‘alt-right’ is not so united. But some of its ideas have gone mainstream. 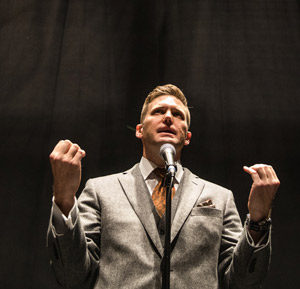 Richard Spencer at a press conference at the University of Florida, in Gainesville, Oct. 19, 2017. (Evelyn Hockstein/For The Washington Post via Getty Images)

BY RON KAMPEAS
WASHINGTON (JTA) – Unite the Right, the agglomeration of far-right groups that organized the deadly Charlottesville, Va. rally last year, hopes to meet there again on its anniversary, Sunday, Aug. 12.

Likely missing from the 2018 rally, if the courts allow it to take place: armed individuals and groups, by court order, and, because of infighting and attrition, a good chunk of the 500 or so extremists who turned up last year.

Unite What’s Left of the Right might be a more accurate moniker.

At-right Continues Efforts
Last year’s rally seemed to climax a year in which the white supremacist wing of the “alt-right” appeared to be ascendant. Chanting “The Jews will not replace us” and other incendiary slogans, the Charlottesville marchers dropped any pretense that they were merely economic nationalists looking to preserve the country’s borders, or heirs of the Confederacy hoping to preserve their heritage.

Donald Trump’s equivocation on the march, and his comment that there were “good people” among the far-right marchers and their opponents, was also seen as a low point of his young presidency.

On the anniversary, the far right hasn’t disappeared: The Anti-Defamation League recently noted a huge increase in white supremacist propaganda on U.S. college campuses, including anti-Jewish and racist rhetoric. But some of the “alt-right” leadership is in disarray, and the media have largely moved on, in part because the White House itself is at the center of the debate about white nationalists’ favorite subjects: limiting immigration and preserving America’s “culture.”

Mainstream Acceptance?
Critics of Trump say his immigration policies—including the travel ban on people from certain Muslim countries, his musings on certain African countries as “sh*tholes,” and the policy of separating families at the U.S.-Mexico border—showed that their ideas found a home in the mainstream.

Here are some snapshots of where the “alt-right” is as we head into the Charlottesville anniversary.

The Lawsuits:
Charlottesville, the municipality, joined several other plaintiffs in a bid to mitigate violence in the face of a second rally. They have sued to keep 25 defendants, individuals and groups among them, from returning for any protests bearing arms. The lawsuit has yet to be fully resolved, but so far, at least 11 of the defendants have settled by agreeing not to return to Charlottesville with arms.

Jason Kessler, a key organizer of last year’s event, is leading the effort to reconvene this year in Charlottesville. He has also signed a consent decree. He is allowed to return to Charlottesville, and organize a rally, but he must instruct those who join him not to be armed.

The fact that so many marchers last year bore arms is central to another lawsuit filed by Roberta Kaplan on behalf of 11 Charlottesville residents, including several wounded when a white supremacist rammed a car into a crowd of counter protesters, killing one. Kaplan says the defendants’ First Amendment defense does not cover the actual violence. Among the plaintiffs is a Jewish dermatologist.

“People are entitled to have their First Amendment beliefs in this country and to speak those beliefs, but what they’re not allowed to do in this country is to plan, commit and then celebrate violence motivated by those beliefs,” she told NPR earlier this year. A judge earlier recently allowed the lawsuit to go forward. (Kaplan famously won the 2013 Supreme Court case that helped legalize same-sex marriage, U.S. v. Windsor, and cited Jewish teachings in explaining why she took the case.)

While Charlottesville has denied Kessler a permit for his planned reunion, his lawsuit against the city gets a hearing. Kessler is also planning a parallel protest in Washington, D.C., near the White House. The National Park Service has approved a permit.

The Leaders
Richard Spencer is the think-tank face of white supremacism. (He founded the National Policy Institute, which endeavors to lend an intellectual patina to the movement.) He is named in the lawsuit Kaplan filed. According to reports, Spencer’s once prolific campus appearances have dried up and for a period he had trouble finding a lawyer to defend him. Raising money for his defense was also a problem—crowdfunding sites were prone to keep him off their platforms.

Jason Kessler, a Charlottesville local, is still fighting the fight and leading the attempt to reconvene a sequel. The New York Times reports that he still gets into it with fellow residents who resent his role in last year’s rally.

Christopher Cantwell earned the sobriquet “crying Nazi” for appearing disconsolate in a video he posted last August after a warrant was issued for his arrest for the assault of protesters. He was the subject of a Vice video on the rally in which he said he longed for a president “a lot more racist than Donald Trump” and who would “not give his daughter to a Jew.” He was recently convicted and sentenced to time served, plus agreement to stay out of the state of Virginia for five years. True to form, Cantwell cursed the Jews on his way out of the courthouse. He wasn’t crying.

Matthew Heimbach co-founded the Traditionalist Worker’s Party. With its black uniforms and helmets, the group was an imposing and at times violent presence at the rally. He now faces trial for assaulting his wife and the co-founder of his party after the pair found him in a trailer committing adultery with the co-founder’s wife.

The Mayors
Michael Signer, the mayor last year, got it from all sides. A Jewish professor of politics of the University of Virginia, he came under anti-Semitic attack and also was criticized by some residents who excoriated the municipal and police leadership for not sufficiently preparing for the rally. Signer is on the talk circuit now, including appearing at events by Jewish groups, from BBYO to the Anti-Defamation League.

Among his critics was local activist Nikuyah Walker, who went on to become the town’s first black female mayor—with Signer’s backing. She has made redressing racial inequities a central plank of her term.

Extremism In The Mainstream
Paul Ryan, the speaker of the U.S. House of Representatives, recently issued a clarion call. Asked about the “alt-right” at an American Enterprise Institute event, the Wisconsin Republican said, “We have to go back and fight for our ground and re-win these ideas and marginalize these guys the best we can to the corners. Do everything you can to defeat it.”

Ryan sounded resolute—except that he is leaving politics at the end of the year and is something of a lame duck.

The Republican establishment explains that many (but not all) of the extremists are sneaking in through primaries in solidly Democratic districts where the state and national GOP chose not to field or back a credible candidate.

Critics of President Donald Trump wonder whether the extremism is a feature or a bug of Republican politics under his administration. They accuse the president of race-baiting when, for example, he uses words like “animals” to describe immigrant criminals. (The White House said the term applied exclusively to gangs like the notorious MS-13, although critics respond that even exaggerating the threat of the gangs is a way to stoke fear of immigrants.)

When Trump warned recently that European leaders “better watch themselves” because immigration is “changing the culture” of their societies, many thought he was projecting onto the continent his own and his base’s fears about immigration, legal and otherwise. Even Trump acknowledged that his remarks were not “politically correct.”

Additionally, there are Republican politicians like Rep. Steve King, R-Iowa and Corey Stewart, the nominee in Virginia in this year’s Senate election, who have embraced the rhetoric of the far right and who have not been disavowed by the establishment.

“There’s been a reluctance to denounce Steve King or Corey Stewart or even cut them off from financing,” said Heidi Beirich, the Intelligence Project director at the Southern Poverty Law Center. “And there’s the issue that their anti-immigrant, anti-Muslim messages you heard in Charlottesville now resulting in policy out of the Trump administration. It’s scarier to have policy based on their ideas than having a few groups that are well put together.”