A year after the disaster, Pittsburgh is more than the site of a tragedy 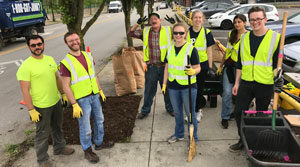 A group of volunteers takes to the streets to beautify Pittsburgh. Photo courtesy ofJewish Federation of Greater Pittsburgh.

By JEFFREY FINKEKSTEIN
PITTSBURGH (JTA) — Over the last year, people across the world have stood shoulder to shoulder with all of us in the 412. We have been showered with love in the weeks and months since the attack. We will never forget the generosity, care and support.

Words Matter
But there is still a way that concerned citizens can help: Make sure that when you speak about the anti-Semitic attack in Pittsburgh, you use language that reflects well on the city I love.

I receive Google alerts every day that tell me when articles appear in the media using the words “Jewish” and “Pittsburgh.” Since last Oct. 27, in these daily multiple alerts, I read how the media, elected officials and the general public portray and reference the attack. I see many references to the “anniversary” of “Pittsburgh.”

I never refer to the one-year marker as an “anniversary” to avoid the idea that this commemoration of the 11 people killed is happy or positive in any way. More important, I never refer to this attack as simply “Pittsburgh” or “Tree of Life,” and I hope everyone will stop doing so.

This attack was not representative of Pittsburgh. It was an anomaly.

Pittsburgh, a city I have called home for the past 21 years, means more than one act of hate.

Pittsburgh is a city rich with history. The city literally built the world through its steel production. For a period of time, Pittsburgh was the third-largest home to Fortune 500 companies behind New York and Chicago. Pittsburgh boasts diverse neighborhoods with many faiths and ethnicities.

The city is growing and becoming younger each year. We are home to strong educational and medical organizations — the so-called “eds” and “meds” — as well as a strong technology sector. I see the physical manifestation of innovation on our streets, as Uber and Argo AI both have brought fleets of self-driving cars here.

A Shared Trauma
Although our Pittsburgh Jewish community is spread throughout the Greater Pittsburgh region, the Squirrel Hill neighborhood that is home to the Tree of Life synagogue continues to serve as the heart of Jewish Pittsburgh, as it has for nearly a century. We live and work together and celebrate our diversity of Jewish experiences — rich and poor, Orthodox, Reform, Conservative, Reconstructionist, “just Jewish” and nondenominational. According to our most recent Jewish Community Study commissioned by the Jewish federation, we have grown to nearly 50,000 people, with major expansion in our millennial age group.

If you refer to the shooting simply as “Pittsburgh,” you denigrate what this city is all about. You take a single, horrible anti-Semitic action and define this region and our Jewish community by that incident.

So what is the right way to refer to what happened? I suggest that everyone refer to this attack as “the anti-Semitic attack at the Tree of Life building.” An alternative would be to say “the attack on Jewish congregations in Pittsburgh” or “the Oct. 27 anti-Semitic shooting.”

Jewish Pittsburgh has continued to grow and thrive in the year since the anti-Semitic attack here. Across Pittsburgh, faith groups have formed new bonds and started new projects together. We have united as a city to support the victims’ families and the many people still healing from physical and emotional wounds.

In short, we are more than one act of hate. I hope we will stop calling a horrifying, anti-Semitic attack “Pittsburgh” or “Tree of Life” alone. Words matter. They truly matter to all of us in Pittsburgh.