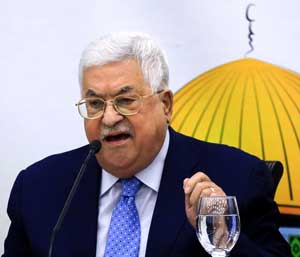 Palestinian Authority leader Mahmoud Abbas makes a statement as he attends the Revolutionary Council Meeting of Fatah Movement at the Palestinian Presidential Office in Ramallah on Dec. 18, 2019. Photo by Flash90.

By ISRAEL KASNETT
(JNS) – In an address to the U.N. General Assembly last September, Palestinian Authority leader Mahmoud Abbas pledged to a sympathetic gathering of world leaders that he would hold parliamentary elections.

While the announcement garnered international headlines at the time, little progress has been made in the ensuing months towards elections, highlighting what experts see as entrenched corruption and little desire among the Palestinian leadership to be held accountable by its people.

Efraim Karsh, director of the Begin-Sadat Center for Strategic Studies, told JNS that Abbas is trying to postpone elections.

While Abbas promised that he would call for elections when he returned home from New York in the fall, he has since added a stipulation that Palestinians living in eastern Jerusalem under Israeli authority be allowed to vote in any Palestinian Authority elections.

According to Karsh, Abbas’s threat “is nothing but another excuse to delay the elections.”

From Israel’s point of view, Palestinian elections are pointless. According to Karsh, “we already have security cooperation with the P.A., and politically, it won’t get better than it already is.”

Widening Rift
Abbas was last elected to a four-year term as head of the Palestinian Authority in 2005. The P.A. last held national elections in 2006, which resulted in a complete embarrassment for Abbas and his Fatah Party when Hamas, a Palestinian terrorist group, won a surprise victory.

That result led to a widening rift between the two principle Palestinian factions, which resulted in the terrorist group’s seizure of the Gaza Strip from the P.A. in 2007. Since then, little progress towards reconciliation has been made between the two factions, with Gaza remaining under Hamas’s control and portions of the West Bank remaining under the Fatah-dominated P.A.’s control.

In addition, years of anti-Israel incitement have taken their toll on the Palestinian population, and Israel does not believe that a new Palestinian leader will be able to create the necessary environment that will be conducive to reaching a peaceful solution to the Israeli-Palestinian conflict.

“To have fundamental changes,” said Karsh, “you need to change the entire leadership and educate the population, and that is not going to happen, unfortunately. The PLO is not interested in peace in our lifetime.”

The Palestinians themselves are simply not interested, according to Karsh. “The majority do not accept Israel’s existence,” he said. “Even Israeli Arabs are becoming more extremist.”

To that point, Karsh noted that the Arab parties in the Knesset have platforms that call for a change in the nature of Israel as a Jewish state.

Oded Eran, a senior research fellow at the Institute for National Security Studies, told JNS that the call to hold Palestinian elections now “is mostly a result of outside pressure.”

Although he doesn’t think that Palestinian elections will be held anytime soon, the reason it seems Palestinians want them to happen is because “they feel the pressure both from the street and from the international community, not necessarily because they espouse the idea of democracy.”

“Many donors look at the P.A. and leadership as an entity where the legitimacy has expired.”

“The question is whether the elected leadership will maintain the cooperation in security.”

While outsiders may want the Palestinian leadership to hold elections, according to a recent study by the Palestinian Center for Policy and Survey Research, half of Palestinians polled said they do not believe that elections would be free and fair.

As for eastern Jerusalem, Eran agreed with Karsh that the Palestinians are trying to use this political issue as an excuse to postpone implementing the decision and “placing the blame at Israel’s doorstep.”

“Most observers, on the Palestinian side and elsewhere, will realize this is pretext,” he added.

Delay Desired by Everyone?
Even if elections were held and a new Palestinian leader enters office, that individual will not “present softer demands from Israel and will not wish to be seen as a collaborator,” according to Eran. “The question is whether the elected leadership will maintain the cooperation in security, and whether he would be willing to reach understandings with Israel short of a comprehensive agreement.”

According to Eran, neither Hamas nor Israel is the main obstacle to moving forwards. “If the Palestinian political forces really wanted elections and at least want to change perceptions, they would have gone to elections even without [eastern] Jerusalem,” he said. “It is a pretext to postpone the elections as much as possible.”

Eran also suggested that some Palestinians want to “wait and see” which Israeli government will emerge after March 2, the third round of Israeli elections in the course of a year. “This is a major factor in their calculation,” he said.

“From every point of view, the political forces, regardless of whether it is Hamas or Fatah, have an interest in delaying the process,” said Eran. “For the time being, there is no decision and certainly no date.”