Abbas: ‘We have been paying martyrs and families since 1965, will continue to do so’ 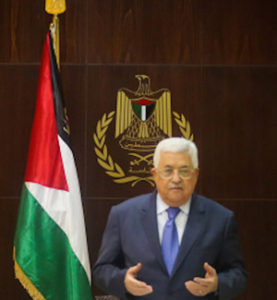 Palestinian Authority leader Mahmoud Abbas at a meeting of the executive committee of the Palestine Liberation Organization in the city of Ramallah in the West Bank, on Feb. 13, 2017. Photo courtesy of Flash90.

(MEMRI via JNS) – Palestinian Authority (P.A.) leader Mahmoud Abbas said in a speech that aired on Feb. 19, on P.A. TV that Israel has been taking a 3 percent cut of customs and taxes that belong to the P.A. because it controls the ports and borders. Abbas was addressing a delegation of U.S. congressmen and the J Street organization.

He said that since the P.A. pays the families of “martyrs,” prisoners and wounded people, Israel has decided to deduct the sum of the stipends from the taxes it has been transferring to the P.A. He then said: “We have decided to refuse to receive all the tax funds [Israel owes us]. We don’t want it. Let them keep it.”

He added that if the P.A. had no more than 20-30 million shekels, which he said is how much the monthly stipends to the families cost, it would still pay that sum to those.

Mahmoud Abbas: “We have funds that are held by [Israel]. They collect these taxes and customs on our behalf. They collect them from the merchants because they control the ports and the borders, and transfer them to us after taking a 3 percent cut.

“In addition, Israel said that the Palestinian government pays money to terrorists. Who are these ‘terrorists’? The martyrs, the prisoners and the wounded. [It is true that] since 1965, we have been paying them and their families.

“Now, Israel has decided to deduct this sum from the tax it collects for us. As a matter of fact, we have decided to refuse to receive all the tax funds. We don’t want it. We don’t want the tax funds. Let them keep it. If we had only 20-30 million shekels, which is the [monthly] sum paid for the families of martyrs, we would still pay it to them. If the P.A. doesn’t have anything other than that amount, I will pay it to the families of the martyrs, the prisoners and the wounded.”