Adviser to top EU court: Goods from Judea  and Samaria, Golan Heights should be labeled 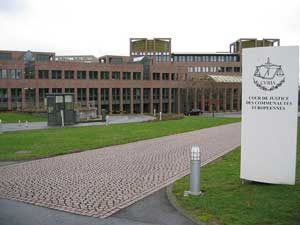 By ELDAD BECK
(Israel Hayom via JNS) – Judea and Samaria goods that are imported into the European Union must be clearly labeled as such to avoid misleading consumers, a senior legal adviser to the European Court of Justice (ECJ) recently said. The ECJ is considering a request from France’s top tribunal “for clarification of rules on labeling goods” from Judea and Samaria, eastern Jerusalem and the Golan Heights.

According to French news agency AFP, while the ECJ is not obliged to follow Advocate General Gerard Hogan’s advice, the former Irish judge’s legal opinions are considered highly influential in the bench’s deliberations.

Ethical Considerations?
In his brief, Hogan said that under E.U. laws, labels must make it clear if products originate from occupied territories, and particularly if they come from Israeli settlements beyond the Green Line.

“E.U. law requires, for a product originating in a territory occupied by Israel since 1967, the indication of the geographical name of this territory and, where it is the case, the indication that the product comes from an Israeli settlement,” said an ECJ statement outlining Hogan’s legal opinion. He said that the E.U. rules on labeling products take into account “ethical considerations” that might influence a consumer’s purchases.

According to the report, citing previous E.U. court rulings saying that Israel’s settlement policy is illegal, Hogan said: “It is hardly surprising that some consumers may regard this manifest breach of international law as an ethical consideration that influences their consumer preferences and in respect of which they may require further information.”

Double Standard Evident
The Lawfare Project, a legal think tank and litigation fund that fights anti-Semitism and the BDS movement, said that if the ECJ adopts Hogan’s recommendation, “it would open a Pandora’s box of lawsuits” against European companies that fail to “properly label products from relevant countries of origin” unless the requirements were applied only to Israel, in which case it would be a ‘flagrant act of discrimination.’ ”

Lawfare Project Director Brooke Goldstein told the Israeli daily Israel Hayom that “the European court has a historic opportunity to put an end to this double standard, which is […] biased against Israel.”

“This type of label is a blatant act of discrimination,” she said. “There are hundreds of disputed territories around the world, but only Israeli businesses and European companies that work with them will find themselves targeted by these unnecessary political requirements.”