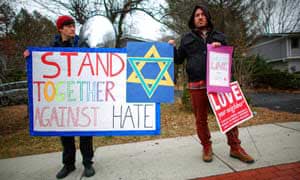 By HEATHER ROBINSON
(JNS) – A horrific attack on the Jewish community in Monsey, took place on Saturday, the seventh night of Chanukah, when a machete-wielding assailant entered and began wildly stabbing at  those attending during a crowded holiday celebration in a rabbi’s home.

It’s the most recent in a series of attacks on Jews in and around New York City over the past several months. During the festival Chanukah, New York City’s Jews were reportedly attacked in hate crimes taking place almost every day.

Weak Response
No one seems to know why this is happening, and in a city of more than 8 million, it’s important to remember the vast majority of people across all communities have absolutely nothing to do with it. But it’s also vital to recognize that it’s clearly become a trend.

Soft On Perpetrators
It’s also clear that the city’s response has been weak. Reportedly, most of the suspects have been released back into the communities they allegedly terrorized.

In one instance, a woman who was charged with punching and screaming at three Orthodox Jewish women, and who told cops, “Yes, I slapped them. I cursed them out. I said, ‘F*** U, Jews!’ ” has already been released on no bail, despite this admission and despite her record for felony criminal mischief, a charge for which she already failed to show up for court appearances.

The release without bail of these alleged attackers is tied to new “bail reform” legislation set to go into effect on Jan. 1 “requiring arraignment judges to free suspects in any nonsexual assault that doesn’t cause physical injury, even in cases of hate attacks,” according to the New York Post.

On top of problems with this new legislation, adroitly unpacked by Karol Markowicz in the Post, it seems a questionable interpretation of the language of this law to categorize aggressive physical assaults such as slaps as causing no physical injury.

Easy Target?
In the unfortunate event that any other group—Muslims, for instance—were being targeted for physical attack in the city, with more than a dozen assaults of mounting severity over the course of a month culminating in a mass machete attack at a religious event, I believe that we would see thousands of New Yorkers take to the streets to stand in solidarity with that community. How much more would that be the case if the courts appeared to be soft on the alleged perpetrators?

To be sure, our Jewish community would be at the forefront of any such demonstrations.

No doubt the Orthodox are being targeted by anti-Semites because they are easy to identify and perceived as an easy target (this despite the fact that some of the victims in the Monsey attack reportedly fought back). Remember: An attack on our most visible members is an attack on us all. Next time, any of us could be in the crosshairs.

We Are One
The Jewish community needs to stand as one. And we must do more, now, to show solidarity with our Orthodox brethren, and to say loud and clear that this is unacceptable. If, God forbid, this trend continues, perhaps the Jewish community of New York City should seriously consider taking to the streets in peaceful protest and asking good New Yorkers of all religions and races to stand in solidarity with us in demanding action from city and state leadership.

Jewish lives matter, too. Not to mention, any community could be targeted next in a city that’s soft on hate.

Strange Alliances
But if he’s serious, he should start reflecting on how indeed young New Yorkers have “somehow” gotten the idea that bias is acceptable and reconsider some of his political alliances, including with Rev. Al Sharpton, whom de Blasio recently (and obscenely) described as “pushing for justice in the teachings of Dr. King.” In reality, Sharpton, who has lately tried to clean up his image, built his career on inciting racial violence, including during the bad old days of the 1991 Crown Heights riots in Brooklyn, and has never publicly apologized for it.

De Blasio should also reconsider the Democratic Party’s flawed and specious addiction to identity politics, which pits groups against each other and, in its obsession with difference and power dynamics rather than with universal ethics and spiritual transcendence, is in no way consistent with Dr. King’s vision.

This brutal attack and those that preceded it are a reminder that prejudice, racism and anti-Semitic hate have no one face, no one race, no one religion and no one political ideology. Anyone can be either a victim or perpetrator. While socioeconomic disparities and injustices are real—and some groups have suffered unique hardships—none of that gives anyone the right to abuse another person or group because they are different or perceived to be “privileged,” as some imagine Jews to be. Being part of a historically disadvantaged group shouldn’t provide immunity from the law.

Climate of Hate?
Those quick to point to a “climate of hate” when it concerns the utterances of U.S. President Donald Trump, and who also embrace identity politics, should consider how they may unwittingly be contributing to this climate by dividing and apportioning values based on ethnic and racial identity without recognizing the deeper truths that we are all human, that no one has a monopoly on prejudice, and that we are all equal under the law. Are kids learning this at home and in school? They should be.

It’s long past time to teach the simple truth that anyone, of any religion or race, is capable of dehumanizing others, which is the essence of racism. And anyone can be better than that.

Perhaps that’s the first thing that Mayor de Blasio should insist be taught in Brooklyn’s public schools as part of a new curriculum he has promised if he’s serious about countering hate and the terrible ignorance we’ve seen spewing onto the streets of New York City in recent weeks.

Lesson One could be: There is only one race, the human race.