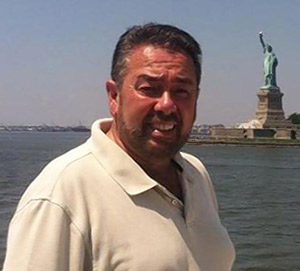 NEW YORK CITY (JTA)–An aide to a longtime Brooklyn state senator compared a Parkland, Fla., high school student protesting against gun violence to Adolf Hitler. Anthony Testaverde, an aide to Marty Golden, posted to Facebook photos of Marjory Stoneman Douglas High School student activist David Hogg and juxtaposed them with photos of Hitler. One set of photos shows Hogg raising his right arm in the air and pumping his fist alongside a photo of Hitler raising his right hand in the Nazi leader’s ubiquitous salute. In a second set, Hogg is wearing a black mourning band on his upper arm and is next to a photo of Hitler with a swastika armband. A caption reads: “I knew something was off about this kid.”

Now Removed!
The images and an accompanying threat have since been removed from Facebook, but can be found in screen grabs on some websites.

Testaverde also shared a post that read “The Democrats are doing exactly what Hitler did … he used the Youth to disarm and control the People. This is scary!” Golden, a Republican in a mostly Democratic borough of New York City, has been a state senator since 2003.

Calls for Firing
Golden in a statement called the Facebook posts “as wrong and offensive as they are misguided,” and said they had been deleted at his direction. He did not comment further on the future employment of Testaverde.

A Jewish Democrat running against Golden, Ross Barkan, called on him to fire his aide.

“Anti-Semites, racists, and far-right conspiracy theorists have for years opposed common-sense gun control measures by invoking the name of Adolf Hitler,” Barkan said. “As the great-grandson of Jews who fled anti-Semitism in Eastern Europe, I am deeply mortified that a staffer for the state senator who represents me would endorse such vile viewpoints.”

Kosher supermarkets hate cleaning for Passover as much as you do—maybe more!
‘We march today because it’s what we have to do to sleep tonight’: Jewish students on the March for Our Lives