AJC new anti-Semitism director: Jew-hatred must be held to same standard as other prejudice 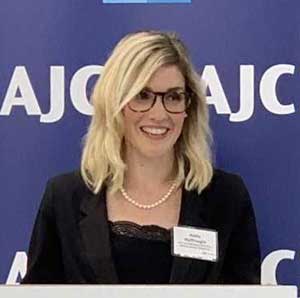 By JACKSON RICHMAN
(JNS) – Israel and the Jewish people are always looking for friends, and they seemed to have found one in Holly Huffnagle.

A Christian now employed to help tackle anti-Semitism in the United States, she has more than one thing in common with the Jewish and pro-Israel community of late. On July 12, Huffnagle was targeted by the anti-Israel group IfNotNow, which retweeted a post by the American Jewish Committee, where in April she was named its U.S. director for Combating Anti-Semitism, claiming that she can’t be part of the fight against Jew-hatred.

“We welcome allies in the fight for Jewish safety—but it should be obvious that white Christians should not be leading Jewish organization’s advocacy against antisemitism,” tweeted IfNotNow.

Huffnagle previously served as the policy adviser to the Special Envoy to Monitor and Combat Antisemitism at the U.S. Department of State, and as a researcher in the Mandel Center of Advanced Holocaust Studies at the U.S. Holocaust Memorial Museum in Washington, D.C.

Huffnagle, 33, and her husband, Jason, live in Los Angeles.

JNS talked with Huffnagle by phone on July 14. The interview has been edited for brevity and clarity.

Q: What do you hope to accomplish in your new role?
A: I hope to lower levels of anti-Semitism across the United States. It’s not just going to be me or AJC; it’s going to be a whole cohort of individual organizations and also government leaders. Some of the more concrete tasks I hope to accomplish is having AJC, which has over 115 years of experience in combating anti-Semitism around the world be more of a “go to” resource on what anti-Semitism is, what it looks like today in American society, and how we can offer that experience and advice to government leaders to corporations to tech platforms.

Q: How do you seek to be different than organizations like the Anti-Defamation League?
A: AJC is a global leadership organization. We’re known for our advocacy efforts around the world with government leaders, with legislation, with our policy objectives, so we work at the top level on change, less grassroots. I’m not monitoring anti-Semitism throughout the United States. I’m not doing anti-bias training in classrooms or with the FBI. We’re really looking at where anti-Semitism is coming from and trying to help our leaders understand that so they can address it more effectively.

Q: What’s your response to the IfNotNow tweet?
A: I am white. I am a Christian. But where I reacted was just a broad brushstroke of hating Christians in this way. I served in the State Department during the Obama administration. I’m really not partisan. And I would also argue that David Harris, our CEO, is Jewish. Yes, I’m coordinating our efforts on the ground with how we respond to domestic anti-Semitism and working the agency. It’s incredible that a Jewish organization is hiring non-Jews because anti-Semitism is mostly in itself by non-Jews. I think I have a better understanding, especially within Christianity, and I grew up as an evangelical Christian. I know that audience and my outreach can go even further.

Q: What’s your reaction to young evangelicals being targeted by anti-Semitic and anti-Zionist activists?
A: Of course, I’m disappointed. It’s important that we talk about the various sources of anti-Semitism, whether it’s the far-right or the radical left, or from religious extremists or sectors of other minorities. No matter where it comes from, when someone identifies as a Christian and talks about these anti-Semitic beliefs, I don’t think it’s a reflection of the faith that we’re supposed to be following.

This speaks much broader to when we see anti-Semitism coming from our own side—for me, coming from Christians. When I see anti-Semitism coming from Christians, I feel all the more committed to fighting that. It can come from the political level as well; when it comes to the Democratic Party and anti-Semitism, they need to call it out first before pointing fingers at the right and the right pointing fingers at the left. They need to tackle the issue within their own camp, and that’s something that we’re not seeing. It’s become very politicized. That’s another thing that AJC will be leading in continuing to make the fight against anti-Semitism bipartisan and calling out all sources of it vocally.

Q: What’s the best way to combat anti-Semitism?
A: The best way is a multi-pronged approach that involves coalitions, including with those who aren’t Jewish. At AJC, we have this kind of multi-pronged strategy where we’ll have looked at rising European anti-Semitism, which came about a decade-and-a-half or so really before we’re seeing it in the United States. In the early 2000s, we saw it in Europe and we had to react—looking at a prong of security, prong of legislation, a prong of better data, conducting surveys to see where is it coming from and what does it look like. The prong of how we tackle it online.

Q: Does this multi-pronged approach apply to combating negative sentiments and activities on college campuses?
A: Absolutely. The college campus is a unique space in its commitment to the freedom of ideas. We see free speech almost being stifled, including towards pro-Israel activists. It’s important that we bring that up.

Q: How do we best protect our institutions from these threats?
A: The first practical step is physical security. When I was working at the State Department, that was one thing we actually had to do first—ensure that the community we were trying to protect, especially in Europe but around the world, have physical security, if needed. But that’s a Band-Aid.

We focused on other ways to educate, but make sure that the security of synagogues is fully funded, the government funding it. We had a lot of challenges in Europe with governments not supporting the funding of institutions and institutional security.

Q: Why do we see what appears to be a double standard in the media and culture when it comes to reacting to anti-Semitism, compared to the Black Lives Matter movement, which has been criticized for adopting anti-Semitism and anti-Zionism?
A: I think mainstream society, and those mostly on the left, are afraid of a reaction. There’s something with “cancel culture,” which has some good—people need to be held accountable for their words and actions and we do need to call out people. But I think there’s been a misunderstanding in general about what it means to be Jewish. And unfortunately, the Jewish community is perceived as “white” or “privileged,” or embodying some of the tropes that exist not just within the African-American community or other minority communities, and even within “White America” that they have power, control and money.

When you call out anti-Semitism, there’s a fear that people might get reprimanded for that whether it be The New York Times, the NFL with the [Philadelphia Eagles] DeSean Jackson case—and that’s not OK. That’s where Jewish organizations, but also non-Jewish organizations, need to push back and hold anti-Semitism to the same standard of other forms of racism and prejudice.

Q: What was it like to live and work in Poland, considering the history of the Jews there?
A: I’m always asked if I’m Polish or Jewish; the answer is no to both questions. Then the question is why and what I’m doing. I like the question of if I’m Jewish or not the best because it gets to the heart of what we’re talking about. Everyone expects only Jews to fight the hatred against them. But that’s already a problem; they don’t recognize anti-Semitism is a societal issue.

It was in Poland I actually first learned about the two millennia of Christian anti-Judaism, which most Jews know and most Christians don’t know. For me, it came as a wake-up call, and I realized that I really wanted to study Polish Christianity given how much it really affects their identity and national politics, even what we’re seeing now. That was my entry point into combating anti-Semitism.

I returned to Poland several times over the next five to six years, lived there for a summer and worked at the Auschwitz-Birkenau State Museum. It was a learning and growing experience for me. I’m watching from across the Atlantic with a nervous eye on what’s happening today, but I have incredible colleagues fighting the good fight.