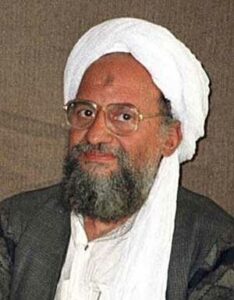 Dr. Ayman al-Zawahri in a pho during his third and last interview with Osama bin Laden in November 2001 in Kabul, the capital of Afghanistan. Al-Zawahri was present in this interview and acted as bin Laden’s translator. Photo courtesy of Wikipedia.to taken by Hamid Mir, who snapped it

(JNS) – Al-Qaeda’s General Command recently released a statement in Arabic and English commending the past year of operations by the Al-Qaeda-linked terror groups Al-Shabab in Somalia and the Group to Support Islam and Muslims in West Africa.

Those operations were part of the “Jerusalem will never be Judaized” campaign, according to a report by The Middle East Media Research Institute (MEMRI) Jihad and Terrorism Monitor and exclusively shared with JNS.

The statement by the Al-Qaeda leadership particularly commended the recent attack on the U.S. Camp Simba in Manda Bay, Kenya.

The statement also calls on Muslims worldwide to unite and target interests of the “Zionist-Crusader alliance” worldwide in order to liberate Jerusalem, singling out Islamic scholars and Muslims in Palestine to play their part in supporting jihad, and condemns media outlets, particularly Al-Jazeera, as “clients of America and the Zionists” for not covering the Manda Bay operation.

MEMRI had previously reported that Al-Sahab, the media arm of Al-Qaeda, released a video on Sept. 11, 2019, in which the group’s leader, Ayman al-Zawahiri, urged attacks against American, Israeli, European and Russian interests worldwide.