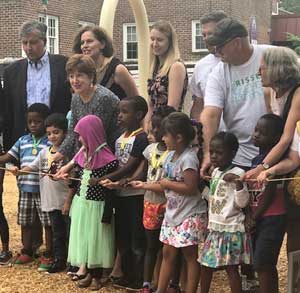 Mayor Sheehan was joined by children involved with the RISSE summer program and others in cutting the ribbon for the new playground.

By SUSAN WOLLNER
The laughter of the children and the smiles on their faces as they climbed onto the new playground built by a team of interfaith, community partners for the Refugee and Immigrant Support Services of Emmaus (RISSE) in Albany, was a “feel good” moment for the adults at the July 11 dedication and ribbon cutting. The dedication of the community playground in the Pine Hills neighborhood brought together many of the 200 volunteers from various churches, synagogues and mosques in the Capital District who had built the state-of-the-art playground in late June, along with the RISSE staff, neighbors, business owners and local officials,

Volunteers from Congregations Beth Emeth, Ohav Shalom and Temple Israel were on hand for both the community build and the ribbon-cutting ceremony. Cantor Jodi Schechtman and Rabbi Scott Shpeen of Congregation Beth Emeth both offered words of support for the welcoming and caring for local refugees and prayers at the dedication. Albany Mayor Kathy Sheehan stood with children from RISSE and others to officially cut the ribbon for the ‘RISSE Together Playground.’

RISSE, an organization that helps immigrants settle in Albany, offers services for both adults and children in the Albany area.

While the initial goal was to fix the aging playground, the project quickly expanded into a playground rebuild, according to Dan Cotton, chairman of the project steering committee, in his remarks at the dedication. Originally, the prospect of raising the funding and volunteers for the project seemed daunting, according to Cotton at both the build weekend and dedication. “The steering committee started out with a $15,000 grant from Kaboom, a playground construction company, and five volunteers,” he said. “Five months later, we had over $50,000 in grants, $10,000 in cash donations from individuals, churches and temples, and $20,000 in in-kind donations from businesses.” Cotton marveled, “In the end, we’ll have secured nearly $90,000 in cash and in-kind donations. That is an extraordinary achievement.”

While the playground build was important, the long-term mission to develop a community, interfaith bond was equally important, according to Cotton, “In addition to building a playground, we’re here to build community,” said Cotton to volunteers at the build on the weekend of June 22-23.

“Having a place for children to play after school or while their parents are learning English or getting assistance to find a job or an apartment is so important,” said Rifat Filkins, the executive director of RISSE. “RISSE 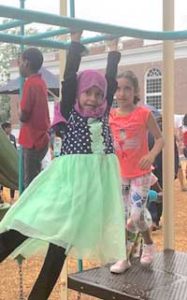 is like one-stop shopping for these families,” added Filkins, who immigrated to the United States from Pakistan in 2009 to work at RISSE. According to Filkins, the organization now serves about 200 families each year from 33 countries. This includes working with children in its afterschool program and an eight-week summer program. “We originally had only 35 kids in the afterschool program for students K-8; now we have 100,” she said. She reported that there are about 80 kids who are newcomers to the United States each summer.

“The long-term goal is to build a bridge with the locals,” said Abby Nash, chairwoman of Beth Emeth’s Social Action Committee.

““We are fulfilling one of our core Jewish values of welcoming the stranger,” Judy Avner, president of Congregation Ohav Shalom said about volunteering at the build.

“The amount of support coming from the local community and its stakeholders like the neighbors, businesses, churches, synagogues and others is amazing,” said Owusu Anane, a son of immigrants from Ghana and the city councilman for the Pine Hills neighborhood who volunteered for the project along with other neighbors. ““

“RISSE is an important place for refugees and immigrants. A safe playground will be a magnet for more people to come,” said Ellen Sax, vice president of community engagement at MVP.

“RISSE takes a holistic approach to helping people settle here,” said Nashibah Elmi a member of the Masjid As-Salam mosque on Central Avenue in Albany and a former intern at RISSE who  had volunteered for the build. Elmi, who is a Somalian refugee, added, “Rebuilding the playground is the perfect project,” she said. “Play is the biggest part of a child’s day,” she said. “It’s how they make friends, learn communication skills and how to resolve differences,” she said. “I hope this sparks more volunteers and gets even more people engaged,” she said. 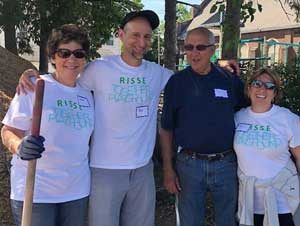 In his closing remarks to volunteers at the build, Cotton had said, “We are building an enduring monument of our collective commitment to a fundamental American value: Welcoming refugees and immigrants and valuing the gifts and energy they bring to our community.” He continued, “By working together this weekend—across lines of faith, culture, neighborhood—we are demonstrating to the RISSE community, to the Capital Region, and to ourselves what is possible in America when we are at our best. We RISSE Together.”

Rescued twice: The archive that survived the Holocaust and the AMIA attack
‘We no longer feel comfortable in our own shul’: North Miami Beach’s Jews cope after another synagogue shooting