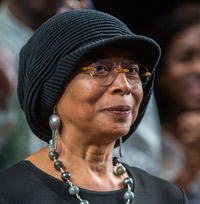 In an interview with The New York Times Book Review, Walker — who is best known for her book The Color Purple, detailing the hardships of African-American women in the early part of the 20th century — responded to a question about what she was currently reading by giving a shout-out to Icke’s self-published tome And the Truth Shall Set You Free.

“In Icke’s books there is the whole of existence, on this planet and several others, to think about. A curious person’s dream come true,” Walker said.

Bias Conspiracy
Yair Rosenberg, a columnist for the online Jewish magazine Tablet who first noted her recommendation, noted that Icke is infamous for his conspiracy theories regarding the Jews, as well as a secret cabal of lizard men who secretly control the world. In his book that was endorsed by Walker, Icke blames “Jewish members of the conspiracy” with deploying the Anti-Defamation League to stifle discussion about the Rothschild family’s alleged ties to the cabal. Icke claims that he is not implicating all Jews in the so-called plot, although Jews play a distinct and outsize role on nearly all of the book’s 476 pages.

Walker had previously lauded Icke’s books on more than one occasion and even went so far as to endorse one of his lecture tours. Aside from endorsing Icke, Walker has herself engaged in explicitly anti-Semitic behavior, posting a poem on her website in which she tabled the Talmud a “poison” responsible for many of the world’s ills. The poem alleges that the Jewish legal compendium condones marriage and intercourse for children as young as three years old, the rape of young boys and the murder of gentiles.

Tablet also criticized the New York Times for presenting Walker’s recommendation without qualification. Her comments appeared in a recurring question-and-answer feature in which authors good-naturedly discuss their reading habits.

Anti-Israel Too
In response to Walker’s interview, the ADL tweeted that it was “deeply disappointed that @nytimes would print Alice Walker’s unqualified endorsement of a book by notorious anti-Semitic conspiracy theorist David Icke. We have asked editors to update the review w/ information about this author’s #antiSemitism.”

In response to the controversy, the Times issued a statement that the recurring feature in which Walker was cited was “an interview and portrait of a public person through the lens of books; it is not a list of recommendations from our editors. The subject’s answers are a reflection on that person’s personal tastes, opinions and judgments. As with any interview, the subject’s answers do not imply an endorsement by Times editors. Moreover, our editors do not offer background or weigh in on the books named in the By the Book column, whether the subject issues a positive or negative judgment on those books. Many people recommend books Times editors dislike, disdain or even abhor in the column.”

For his part, Icke seemed tickled by the endorsement, posting about Walker on his personal web page.

The controversy sparked social media discussion, and not just from the Jewish community, about why Walker remains in high esteem despite her repeated dabbling in anti-Semitism and conspiracy theories.

The African-American feminist critic Roxanne Gay noted on Twitter that “Alice Walker has been anti-Semitic for years. I talk about it at my events when I talk about how much I appreciate Possessing the Secret of Joy,” referring to an early novel by Walker.

Walker’s defenders said she is not anti-Semitic and is being singled out for her anti-Israel views. In 2012, Walker refused to authorize a Hebrew translation of The Color Purple, and has urged other artists to boycott what she calls Israel’s “apartheid.”

In response, Gay tweeted, “If some of you would do some basic reading you would know that Walker’s anti Semitism has nothing to do with her critique of Zionism. I am not conflating these things. Read her blog, note the anti Semitic writers she values, and Jesus Christ, face reality.”

How to tell if your child is traumatized by the Pittsburgh shooting, and what to do
Sch’dy JCC honors Sonia Rubenstein for community service; notes efforts of corporate partnership, and philanthropic leadership at gala