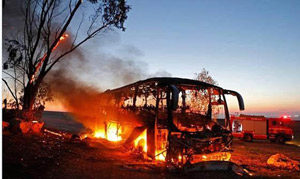 Bus that was hit in recent Hamas rocket attack.

To the Editor:
Hamas is a designated terror organization, motivated by the ideology and doctrine to annihilate the state of Israel.

On November 12th beginning at 4:30 p.m. and throughout the night, Hamas launched an unprecedented attack on Israel, firing over 400 rockets from the Gaza strip into Israeli towns and communities.

Dozens of Israeli civilians have been hurt by the fire (including one dead Palestinian, identified as Mahmoud Abu Asbah, 48, from Halhul who was working in Israel) ; a bus carrying civilians was hit by an anti-tank missile, and rockets have struck homes and civilian infrastructure, resulting in wreckage and fires.

Hundreds of thousands of citizens’ every-day lives are utterly paralyzed. They are forced to remain close to bomb shelters, unable to attend their workplaces. Over 250,000 Israeli children are unable to attend school as the Hamas rocket barrage continues. Municipal elections in the Hof Ashkelon Regional Council, scheduled for today, have also been cancelled due to the attack.

Even more severe damage and higher casualties have been avoided, as the Iron Dome has intercepted some of the rockets launched from Gaza and civilians remain in bomb shelters during the attack.

Hamas is committing a double war crime: it is deliberately targeting Israeli civilians, and is hiding behind its own Palestinian population, abusing them as human shields.

Hamas places no value on human life and exploits its own people in its assault on Israel. Rocket launchers concealed nearby Gazan homes, schools, mosques and hospitals place innocent Palestinians in the way of fire and utilize them as human shields.

In response, Israel targets Hamas terrorists and Hamas infrastructure. Israel will not allow the Hamas terror organization to terrorize citizens and will do what is necessary to protect them. Reflecting the values Israel believes in, Israel does its utmost to avoid harming uninvolved Palestinian civilians.

In 1986, another anti-Semitic Pittsburgh shooter murdered my childhood friend
5 things to know about Miriam Adelson