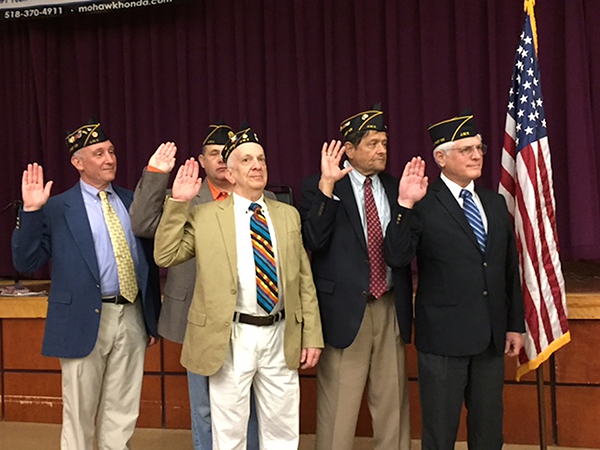 By RICHARD GOLDENBERG
“It is a unique mitzvah to stand and be counted with Jewish War Veterans, to counter enduring lies and misperceptions about Jewish American service and confront anti-Semitism in the modern era,” said Paul Zonderman, transitioning out of command of Albany Post 105 to take the reins of Post 106 in Schenectady as members of the Capital District Council, representing more than 110 Jewish veterans in posts in Albany, Schenectady, Amsterdam and Saratoga Springs gathered at the Sidney Albert Albany Jewish Community Center on Sunday, June 11, to install new officers and set a course for the coming year.

Joining the group was former New York State Department Commander Michael Menschel of Queens who served as installing officer for the new leaders. 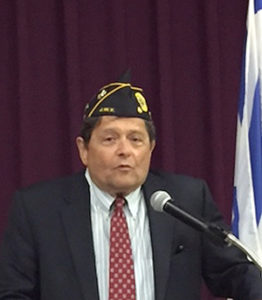 Menschel spoke about his years of service to JWV, rising from commander of Post 258 in Queens to leadership in the Queens County Council to the Department of New York. His message to veterans focused on membership. Menschel has served as the JWV national committee chairman for membership for more than a decade.

“We’re losing more members than we’re gaining every year,” Menschel said, reflecting the changes in demographics as Americans lose WWII and Korean War veterans by the thousands every day.

“Sadly, I have to say that we’re now seeing the passing of Vietnam veterans, and in numbers far greater than those before them,” Menschel said, acknowledging his concern over the health effects that service in Southeast Asia may have caused.

Menschel acknowledged the efforts in this area to recruit members.

“Most posts have very few younger members, and I’m really glad to see so many here in Albany,” Menschel said. “In my post, I’m considered one of the young guys, and I’m 66.”

Zonderman served in the U.S. Marine Corps from 1965-68, with a tour in Vietnam with the 3rd Marine Division in 1966-67 that saw him stationed in DaNang and later in Phu Bai.

He practiced law in Boston until November 1976, when he accepted a legal position with General Electric in Schenectady. Zonderman retired in 2014, after a career as attorney, arbitrator, and 12 years as the town judge of Niskayuna.

Zonderman spoke about the important role that JWV plays in both the Jewish community and with fellow veterans, while acknowledging the reduced numbers available for membership both locally and nationally. Zonderman addressed the cultural changes in society that present challenges to a variety of social organizations, from religious congregations to men’s’ clubs, bowling leagues, Elks’ Lodges and veterans service organizations.

“We have to ask yourself, why are we doing this recruitment? What are we trying to achieve?”

“JWV is for a purpose,” Zonderman said, “to show the world that Jews have worn the uniform throughout our history. We have a reason to stand and show our presence in the community.”

Altman, set to lead Albany Post 105 in its 82nd year, was a career officer in the New York Army National Guard. He began his service as a private and was later commissioned as a lieutenant in the ordnance corps. After 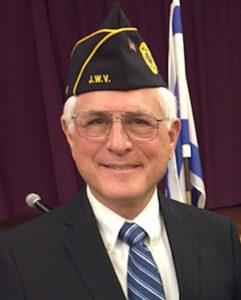 21 years of service he retired as a major in the judge advocate until his retirement in 2004.

He is a second-generation Army officer, the son of the late WWII veteran Lt. Col. Arthur Altman.

He was the author of the historic plaque of the New York State Korean War Memorial in Albany and is a member of Post 1520 of the American Legion.

He is the senior attorney of the Colonie based Altman Law Firm and a traffic prosecutor for the Colonie Town Court.

The gathering of veterans acknowledged the March death of past Post Commander Herb Holland, a lifelong Albany resident. and noted his JWV activities.

Altman praised past Commander Holand for his recruitment into JWV more than a decade earlier.

“I tell you what, I said, when you make post commander, I’ll join in honor of you,” Altman said.

“So it is more than fitting that here I am now, again honoring Herb, to serve as post commander as he once did. I’ll try to serve JWV and be as committed as he.”

Quentin Tarantino gets engaged to Israeli singer Daniela Pick
The Maccabeats to be featured at opening ceremonies for Capital Region Maccabi Games; you can still be involved!