Aly Raisman to BBYO: Be kind, speak out, stand up for survivors 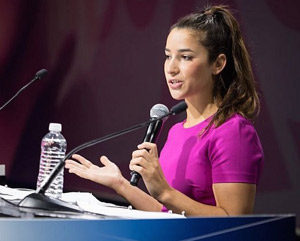 NEW YORK CITY  (JTA) – Aly Raisman, the Olympic gold medalist gymnast, told a recent BBYO conference she drew strength from her Jewish upbringing. Raisman, addressing the pluralistic youth movement’s annual conference in Orlando, Fla., said she wanted to “talk about how proud I am to be a Jewish athlete,” which drew cheers.

“Being Jewish is all about family and I think being Jewish is all about being a good person,” she said. “I have so many amazing memories of being with family during the Jewish holidays.” Raisman, 23, advised her audience to seek family where they could find it. “Family does not have to be blood-related. It can be a coach close to you, a teacher, a friend anyone that you trust,” she said.

Surviving
She alluded to her abuse by Larry Nassar, a former doctor for the U.S. Olympic gymnastics team. Nassar was sentenced to 40 to 175 years in prison for molesting over 150 women and girls over two decades.

“We live in the social media age where I’m sure most of you guys have Instagram or Snapchat or Twitter,” she said. “Social media is great … but it’s also tricky because social media, we only want to show the bests ideas of ourselves.”

She said it was important not to live up to others’ idea of perfection. “I’m not perfect, nobody’s life is perfect. It’s really important if you’re having a hard time to know that its okay to not be okay,” she said.

Other Speakers
Also speaking were Michael Signer, the former mayor of Charlotteville, Va., who is Jewish, and Susan Bro, the mother of Heather Heyer, the counterprotester who was killed by a white supremacist during protests in the Virginia college town last summer.

Signer said he had grown up in Virginia, assimilated, in part because he feared standing out. A trip to Israel when he was 40 brought out his Jewish pride, he said. “Something really clicked just hanging out with all those sabras,” he said. “My own journey of coming to being very proudly and strongly Jewish gave me the strength to have the courage I needed when Nazis invaded my town when I was mayor.”

Bro drew some of the loudest cheers of the day when she recalled her late daughter’s favorite saying: “If you’re not outraged you’re not paying attention.”

Another speaker was Jason Kander, the former secretary of state of Missouri and U.S. army intelligence officer. In 2016, the Jewish candidate made an unexpectedly strong showing in his bid to oust the incumbent Missouri Republican senator, Roy Blunt.

Kander now directs a get-out-the-vote operation for Democrats. He said that he had been advised by others in the military — including Jewish troops — not to reveal to others while he was in Iraq that he was Jewish.

Kander said he now feels embarrassed that he kept the fact he was Jewish from his interpreter, Salaam, until Kander was about to finish his tour. “I had never had a Muslim friend I was as close to as I was close to Salaam,” he said. He was surprised to learn that Salaam knew all along that Kander was Jewish. “Back home in Kansas City my sister cuts your grandmother’s hair,” Salaam told Kander.

Other speakers spoke of Israeli voluntarism and assistance in disaster relief overseas, and Israeli innovation.