Amid gnawing corruption scandals, Netanyahu maintains hold of his seat 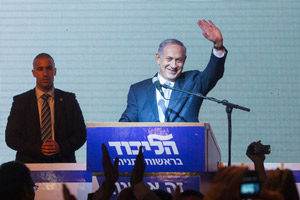 By ISRAEL KASNETT (JNS) – While Israeli Prime Minister Benjamin Netanyahu’s upcoming meeting with United States President Donald Trump next week would normally be the main topic of conversation on Israeli airwaves and in street-side coffee shops, instead it’s the mounting allegations of corruption involving the prime minister that has enraptured the nation.

On Tuesday, Feb. 27. a district court rejected the appeal of Shaul Elovitch and Nir Hefetz over the extension of their remand due to a leaked text conversation between the Tel Aviv Magistrate’s Court judge overseeing an investigation against Netanyahu and the attorney representing investigators. The two suspects are in detention in connection with Case 4000, a police investigation into allegations of Netanyahu’s connection to wrongdoing at the Israeli communications giant Bezeq.

Bad Idea?
Some Israeli politicians are calling for Netanyahu to step aside or even step down. With political storm clouds gathering, talk of early elections has grown louder, and some politicians can be perceived as trying to elbow their way to the front of the race.

Gideon Rahat, an associate professor in the political-science department at the Hebrew University of Jerusalem and a senior fellow at the Israel Democracy Institute, told JNS: “The worst option is for Netanyahu is to leave the government now. That is what [former Israeli Prime Minister Ehud] Olmert did, and he ended up in jail.”

Rahat explained that Netanyahu presents his reality as populist, in which he is supported by the people but stands against the elite, including the mass media, police and judges.

Risks And Threats
“The elections would be one of the weapons of this populist stand,” said Rahat. “I am not sure he wants to use it, and right now, he is supported by 60-plus members of Knesset. If he goes to elections, Netanyahu cannot be certain of what will happen. So early elections are a good threat, but it’s not necessarily what he wants to do since it is a risk. He is better at making the threat than taking the risk.”

Many Israelis have been left wondering why Netanyahu would risk his entire political career just to receive better coverage in the media. Yael Aronoff, associate professor of political science at Michigan State University, told JNS that she believes Netanyahu “probably thought that he wouldn’t get caught, and since only about 30 percent of the population voted for him, that positive coverage in the media would enhance his support in the country.”

Increased Corruption
While there have been a number of cases of government-level corruption over the years in Israel, Aronoff pointed out that it “has gotten worse in Israel, with Ehud Olmert having been imprisoned for corruption and the possibility of Netanyahu being indicted for corruption. This stands in stark contrast to an era in which [former Prime Minister] Yitzhak Rabin resigned in the mid-1970s because his wife had an illegal bank account [according to Israeli law] in the U.S. Because there was so little corruption, that was a big scandal.”

In terms of how Israel compares to other countries, Aronoff said “the International Transparency Group ranks Israel 30 out of 178 countries in terms of corruption. The U.S. was ranked 22nd.”

Expect Elections Soon?
Aronoff added that the possibility of early elections being called for this spring or summer exists if Netanyahu is indicted.

“If that is the case,” she said, “it is possible that a centrist party like Yesh Atid or center-left [one] like the Zionist Union might gain the most votes and have the opportunity to form a coalition. It is also possible that Likud would still win the most votes under different leadership. It is also possible that a new temporary leader would be chosen by Likud and new elections would not be called, or that Netanyahu would try to stay in power for his whole term.”

Political Partners Continue Backing P.M.
As of this writing, no coalition partner appears interested in bringing about the downfall of the government, with many seeing Netanyahu’s leadership a better option than the alternatives.

According to Shmuel Sandler, professor of political science at Bar-Ilan University in Ramat Gan and senior research fellow at the Begin-Sadat Center for Strategic Studies, “unlike Olmert, Netanyahu is not being abandoned. For various reasons, his coalition partners do not want to abandon him.”

Sandler broke it down even more. “The haredim are afraid Yesh Atid leader Yair Lapid will return to the coalition if Netanyahu falls—and Lapid is their big enemy.”

He continued, explaining that Finance Minister Moshe Kahlon, leader of the Kulanu Party, “wants to wait until some of his economic programs materialize.”

Naftali Bennett, education minister and leader of the Jewish Home Party, “is afraid that his political base, if they lose the election, will be a remake of 1992, when former right-wing premier Yitzchak Shamir was tossed out and the left-wing Rabin came to power,” he said. “Bennett’s own party will blame him if he pulls out of the coalition.”

And there’s Defense Minister Avigdor Lieberman, who is “at the top, and where he wants to be. He sees this position, in addition to other senior positions he has held, as his path to the premiership.”

Rahat agreed with Sandler that Netanyahu’s situation could change if he loses the support of one of the coalition parties or of people from within his party.

“The best prediction,” said Rahat, “would be that nothing will happen until a decision is made by the attorney general or unless something dramatic happens in the coalition.”

Can Netanyahu ignore real concerns as he is cheered in D.C.?
Pirate? princess? A ‘Wonder Woman’ Purim? Israelis party like it’s 357 BCE!