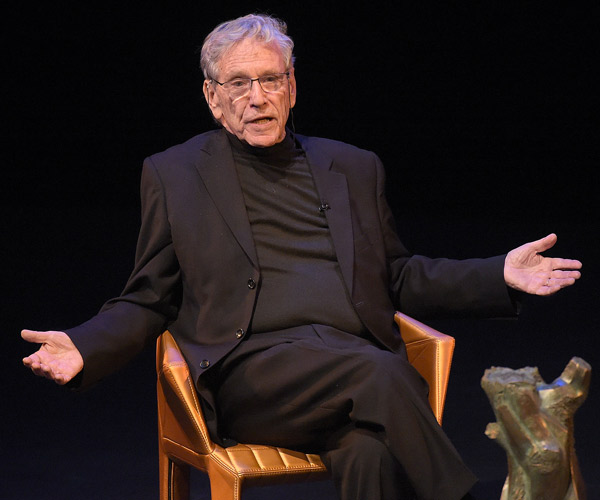 Amos Oz, shown here in 2015, often blurred the personal and the political in his writing. Photo courtesy of Jason Kempin/Getty Images.

By ANDREW SILOW-CARROLL
NEW YORK CITY (JTA) – Amos Oz would often speak in the kind of tossed-off epigrams that come only with a lot of practice. But just when you wanted to smack him for his breezy erudition, he would redeem himself with a flash of spot-on — and hilarious — self-awareness.

Chronicling A Bridge Collapse
In 2011, speaking at the 92nd Street Y about the novel he had just published in English, Scenes From Village Life, Oz said that 99 percent of the typical media coverage of Israel involves extremist settlers, ultra-Orthodox fanatics and brutal soldiers, “and 1 percent saintly intellectuals like myself.”

Oz died Friday, Dec. 28, at age 79, having won nearly every literary prize short of the Nobel and having become perhaps Israel’s most widely translated author. If Jews were in the canonization business, Oz would have earned his wings (halo? robe? my theology is shaky) on the basis of “A Tale of Love and Darkness,  his 2002 novel cum memoir. Like so much of what he wrote, the book is not just autobiographical, but a biography of Israel itself. Although his story ends before he is out of his teens, the young Amos bears witness to the destruction of European Jewry, the height of the British mandate, a Hebrew renaissance in Jerusalem, the great Zionist debates (and debaters) of the day, the rise of the kibbutz movement and the birth of the state.

The book’s brilliance is its blurring of personal memoir and national drama, as in an unforgettable description of the night in 1947 when the United Nations voted to partition Mandatory Palestine, giving international legitimacy to a Jewish state. His father, Yehuda Klausner, still “drenched in sweat from the crush of the crowds” celebrating the U.N. vote, crawls into bed with the young narrator. He tells the boy of the “hooligans” who tormented him and his brother back in Odessa and Vilna, and how the bullies forced the boy’s grandfather “down on the paving stones and removed his trousers too in the middle of the playground.”

Oz continues:
And still in a voice of darkness with his hand still losing its way in my hair (because he was not used to stroking me) my father told me under my blanket in the early hours of November 30, 1947, “Bullies may well bother you in the street or at school some day. They may do it precisely because you are a bit like me. But from now on, from the moment we have our own state, you will never be bullied just because you are a Jew and because Jews are so-and-sos. Not that. Never again. From tonight that’s finished here. Forever.”

In his 92Y talk, Oz explained that the book was neither a memoir nor a novel, but in fact a “tale,” a designation that unfortunately has no category in the Library of Congress. Instead, A Tale of Love and Darkness combines Oz’s strengths as both a novelist and a writer of impassioned political nonfiction — as he often would put it, he had two pens on his desk, “one pen to tell stories and another pen to tell the government to go to hell.”

About Families
If quips like that sound rehearsed — well, considering his body of work, Oz earned a pass. Besides, you can’t plagiarize yourself. And what quips they were! Asked why so many of his stories seemed so downbeat, he would reply, “If I were to sum up my books in one word, I would say they are about ‘families.’ If you gave me two words, I would say ‘unhappy families.’” Explaining what makes for a good story, Oz would say that a bridge that carries thousands of cars each day is no story at all.

“It is only when the bridge collapses that the story begins,” he said.

“The only way to keep a dream intact is never to live it out,” he said. “Israel is a dream come true, and therefore it is disappointing.”

Inevitably with Oz, Israel’s left-wing conscience as well as perhaps its greatest writer of fiction, there was the temptation to read politics into his prose.

“There are political overtones,” he would acknowledge when asked whether this character or that setting was meant to be a stand-in for one Israeli crisis or another. When he tried to deny such meanings, he said, “I am wasting my time. People will see it as an allegory.”

Oz died at a time when so many of the things he stood for — a vital Israeli left, a robust peace process, a vision for sharing the land — are in retreat, if not dead and buried. But even until the end, he never gave up trying. His latest book, Dear Zealots: Letters from a Divided Land, published recently in English, contained essays on the rise of zealotry in Israel and around the world.

Discussing it with The Washington Post, Oz insisted that neither he nor the book was pessimistic. And in doing so, he seemed to be passing a baton.

“Politically speaking, I have been engaged and involved in writing articles, making speeches for 60 years,” he said. “Now it is my time, not to retire but to provide my ammunition, my experience to the younger generation and let them take it from here.”

Amos Oz dies, his fiction is forever, his politics—continue

By THANE ROSENBAUM
NEW YORK CITY (JTA) – The young nation of Israel has witnessed in recent years a dwindling of its founding generation — from the passing of statesmen like Shimon Peres to the receent death of novelist and political activist Amos Oz. Oz was 79; Israel is but 70. Oz was old enough to witness Israel’s fight for independence, and now his death turns the page on yet another chapter of its improbable resurrection — with an old language that became new again.

Oz had a lot to do with that. He imbued Hebrew with a literary style and gave it a novelistic voice, finding new ways to maneuver the aleph and bet so that a once purely liturgical language suddenly possessed a richly lyrical descriptive power.

Multiple Duties
The author of 40 books, including 14 novels, and hundreds of articles and essays, many of which delved into the messy politics of the Middle East, Oz was Israel’s first great man of letters, an old-school public intellectual in a brand new nation with many jobs to fill — from the brawny to the brainy. Those patriarchs and matriarchs made the saying “next year in Jerusalem” both a reality and redundancy. With little natural background, they willed themselves to become equal parts poets, farmers and soldiers.

Oz was a living embodiment of those multiple duties. After his mother’s suicide, which occurred the year before his bar mitzvah, he came of age on a kibbutz and fought in two of Israel’s wars. He then published acclaimed novels such as My Michael and Black Box, as well as the literary memoir A Tale of Love and Darkness, that captured the finer points of domestic Israeli life, the yearnings and sexual passions, and the madness of a people who reinvented themselves so soon after nearly being annihilated en masse.

Introduced World To Israelis
Long before Netflix’s “Fauda,” or the inexplicably sabra-accented Wonder Woman, Oz, through the 45 languages in which his novels were translated, introduced the world to Israelis in all of their rambunctious, high-strung, pattering essence — the kibbutz kibitzers, the brave sabra boys, the Mizrahi misfits, the lost European intellectuals trying to scrape out a life of the mind in a barren desert. Without the wizardry of Amos Oz, many around the world would have had no knowledge of Israeli society, no feel for its people, no sense that they were more real than Jews from, well, Oz.

And Israelis would not have known how they appeared in the imagination of one of their own.

The Start-up Nation had to start somewhere, and Oz was not only there at the beginning, he also captured the mood, rhythms and sorrow of its people for nearly every decade of Israel’s existence.

But there was more. Israelis related to Oz not only as a storyteller, but also as unofficial statesman. He was one of the founders of Peace Now. Indeed, he was among the first, almost immediately after the euphoria of the Six-Day War, to attribute a doomsday prophesy to the capturing of Arab land. In his writings and public statements, Oz spoke of a moral corruption that could only be corrected by a two-state solution. No longer was he a mere fiction writer; he had become a conscience of a nation and a pesky activist in its political culture.

Beyond advocating for Palestinian justice, Oz blamed Israel’s government for not making Palestinian statehood a reality. For a time, many Israelis, especially those who identified with the left-wing, social democratic Labor and Meretz parties, joined Oz in promoting an idealized view of Palestinian intentions and a self-flagellating opinion of Israeli policy.

But now, so many years after the failed Oslo Accords, with multiple wars in Gaza and Lebanon, ISIS and Hezbollah in Syria, a nuclear Iran, and intifadas of the suicide-bombing, mortar-throwing, car-ramming, knife-stabbing and incendiary kite-flying variety, Israelis have largely abandoned the aspirations of Peace Now. The vision for Israel that Oz helped pioneer had suddenly become anachronistic, a byproduct of a bygone, hope-filled era.

Humanism Rejected?
The hardened reality of Palestinian rejectionism, violence and incitement left many Israelis cynical and contemptuous of Oz’s misspent idealism. Sephardic, Russian and Orthodox Israelis formed their own political movements that mowed over the humanistic kibbutzniks and Peace Now advocates like a political bulldozer.

In response, some of Oz’s later books dealt with issues of betrayal, fanaticism and zealotry — as if he was taking on his critics, Palestinians and even himself. But no one would have expected what Oz told a German interviewer in the summer of 2014 when asked about Israel’s military conduct during the Gaza War, and the killing of Palestinian civilians standing shoulder to shoulder with Hamas terrorists:

The founder of Peace Now, who never gave up on the dream, gazed at Gaza not with the romanticism of a novelist but through the eyes of a protective father. To the surprise of many, despite the civilian dead, he acknowledged Israel’s true moral dilemma and the tragic dimensions of this theater of war. An insistence on peace — that it must come “Now”! — is not a sustainable political strategy when peacemakers are nowhere to be found and martyrs are aplenty.

Thane Rosenbaum, a novelist, essayist and law professor, is the author of The Golems of Gotham, Second Hand Smoke, Elijah Visible, The Stranger Within Sarah Stein and, most recently, How Sweet It Is!

The New York Times says a Palestinian medic’s death in Gaza could be a war crime
The story behind Frank Sinatra’s $10,000 yarmulke