An article about “saying goodbye” to Chanukah helps explain why Judaism is meaningless to assimilated Americans. 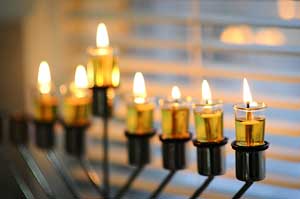 By JONATHAN S. TOBIN
(JNS) – Why should anyone care that a woman who describes herself as “not Jewish” doesn’t think it’s worth the bother to teach her children about Chanukah? The answer is that to institutions that are inherently hostile to faith, shining a spotlight on the decision of those with some ties to Jewish identity to abandon the fraying connection to Judaism that the “Festival of Lights” provides is something worth celebrating.

That’s the backstory to the kerfuffle about The New York Times choosing to celebrate the holiday season by once again publishing an article highlighting alienation from Jewish tradition. In 2018, the newspaper said “Happy Chanukah” to its readers by warning them that fried potatoes could kill them and by claiming that the heroes of the Chanukah story were exactly the sort of red-state religious fundamentalists that most American Jewish liberals despise. This year, they’ve decided to continue that tradition by publishing an essay from a writer who tells the story of her personal journey away from lighting candles.

That many Jewish readers feel insulted by the fact that the editors of the Times think it’s appropriate to trash the holiday in this fashion is understandable. To many Jews, this seems like a decision by the newspaper to wage a war on Chanukah. They wonder why Sarah Prager’s musings about her indifference to a religion that apparently hasn’t actually been observed in any meaningful way in her family for generations should be considered something worthy of space in the liberal paper of record. But to ask the question is to effectively answer it. The Times is merely reflecting the mindset of the fastest-growing demographic slice of the Jewish population: those whom the 2013 Pew Research Institute survey of Jewish Americans labeled as “Jews of no religion.”

The Right To Abandon
Prager seems to be typical of that group many demographers count as Jews when trying to identify the parameters of an American Jewry that can no longer be solely defined by traditional indicators of affiliation. The daughter of a Catholic mother and a Jewish father, she was raised without faith in any religion. Her education in her father’s heritage apparently consisted of lighting Chanukah candles at a Unitarian Universalist meeting house where the holiday was honored alongside Christmas and Kwanzaa.

Given that Prager has now married a lapsed Catholic woman, why should anyone expect that she would teach her children to recite the Hebrew words of blessings that don’t seem to have meant much even to her Jewish grandparents, whom, she tells us, had a Christmas tree along with a menorah.

Jews have achieved unprecedented freedom and acceptance in America, but along with the ability to be proudly Jewish while achieving prominence in virtually any field of endeavor comes the right to abandon heritage and faith as well.

So it’s hardly surprising that a publication, even one with as troubled a history with respect to covering Jewish issues and Israel as the Times—whose primary audience is likely to be less religious—would give prominent space to views that represent the ambivalence people like Prager have about their background. She professes to have respect for the impulse towards tradition and even a touch of envy for religious relatives who live in Israel and carry on the practices Jews have observed for millennia. Moreover, a certain integrity is shown in her decision not to impose traditions on her children without actually believing in the rituals or what lies behind them. So instead of forcing them to learn prayers that they neither understand nor believe in, they will instead merely join with the vast majority of Americans in celebrating Christmas.

The State Of American Jewry
It is that point that makes Prager’s article a relevant jumping-off point for a discussion about the state of American Jewry.

As Rabbi Jerome Epstein, the former head of the United Synagogue of Conservative Judaism, recently noted in The Forward, it’s now 30 years since the publication of the National Jewish Population Study shocked the organized Jewish world with its claim that intermarriage rates had reached 52 percent of all those then marrying, and that only about a quarter of those who did gave their children a Jewish education. That led to a campaign on the part of many Jewish institutions to promote “continuity”—i.e., Jewish marriages—by emphasizing Jewish education, camps and trips to Israel.

Though belated and not given as much support as they deserved, these efforts helped reinforce Jewish identity among those who participated. But the idea that any of it could reverse such powerful demographic trends was mistaken.

Faith?
By 2013, the Pew Survey revealed the intermarriage rates were up to 72 percent among the non-Orthodox, and they are likely even higher today. By then, talk about encouraging Jews to marry other Jews had fallen out of fashion since it was so widespread that doing so was seen as insulting to the majority of the community. In the last two decades, that has created a situation where outreach to the intermarried is the sole priority.

Such outreach may well have enabled many families to find a place within the Jewish spectrum where they can feel comfortable. But, as the Times has just reminded us, the fading away of a sense of Jewish peoplehood is the norm in the absence of faith. That’s something that is lacking among many Jews since, according to Pew, only a bare majority believe in God—among the lowest for any sector of American society, let alone Judaism. Seen from that perspective, instead of being angered by the Times, Jews might do better to understand that Sarah Prager is no outlier when it comes to her feelings about even token recognition of the Jewish element of her family heritage.

Chanukah Concerns
Epstein believes that it is time for American Jewry to return to the advocacy of endogamy while maintaining support for welcoming the intermarried. He’s right, but that’s far too nuanced a task for most Jewish groups, especially those based primarily on fund-raising, to attempt. Sending a child to a school, camp or even on a trip to Israel is vitally important; however, it is no substitute for a home in which Jewish beliefs are respected and practiced.

Nevertheless, Chanukah is an apt time to remember the importance of the struggle to preserve Jewish identity against forces that seem too large and too attractive for us to resist.

For most American Jews, the holiday is merely a blue-tinseled version of Christmas that allows us to participate in the holiday season on something like an equal footing. If, for many assimilated families like that of Prager’s, Chanukah represented the last vestige of the Judaism they observed, it was because it gave them a chance to compete with Santa Claus.

The true meaning of the festival is about resisting assimilation, not compromising with it, as some do by lighting a chanukiyah next to their tree. Chanukah is about the struggle of Jews, both then and now, to refuse to bow down to the idols of popular culture, and indeed, to fight back against them. The miracle is not merely the one about the oil lasting eight days, but the ability of a small ethno-religious tribe to resist the forces that sought to eradicate their existence and to preserve the flame of Jewish civilization.

The candles lit on Chanukah may commemorate a miracle that secular Jews may disdain as a fairy tale, but they are also a reminder that it takes the extraordinary efforts and faith of ordinary Jews to keep that flame lit. What Jews need now is not so much a welcoming spirit, but the confidence to present the growing numbers of American Jews of “no religion” saying goodbye to Judaism with a choice they should embrace if they are looking for something of greater substance and idealism than the materialism a secular Christmas can offer them.

Jonathan S. Tobin is editor in chief of JNS—Jewish News Syndicate. Follow him on Twitter at: @jonathans_tobin.