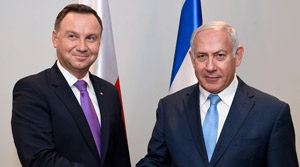 Israeli Prime Minister Benjamin Netanyahu, right, shown meeting with Polish president Andrzej Duda on Sept. 26, 2018, has cultivated diplomatic relations with Israel’s Eastern and Central European allies over objections by some that he  has downplayed concerns over anti-Semitism and Holocaust memory. Sept. Photo courtesy  of Avi Ohayon/GPO.

By SAM SOKOL
JERUSALEM (JTA) – It was meant to be a diplomatic triumph for Israeli Prime Minister Benjamin Netanyahu: a much-touted diplomatic summit in Jerusalem on Monday, Feb. 18, with four Central European states.

Instead, harsh words from Israel’s acting foreign minister opened a diplomatic rift threatening to severely damage Israeli-Polish relations, and the summit was cancelled.

Warsaw decided to pull out of the meeting after Yisrael Katz, citing the late Prime Minister Yitzhak Shamir, told Israel’s Channel 13 that Poles “suckle anti-Semitism with their mother’s milk,” causing a national furor in both countries.

Netanyahu’s Pet Project
Netanyahu has been promoting the meeting of the so-called Visegrad Group — an alliance of Hungary, the Czech Republic, Poland and Slovakia that represents the nationalist and conservative wing of the European Union — as heralding a nationalist bloc within the E.U. that supports Israeli policies more strongly than many in the west.

However, he has also come under harsh criticism from domestic critics on both the right and the left, who have alleged that he has shown an overly solicitous attitude toward Israel’s Eastern and Central European allies. According to this view, Jerusalem has downplayed concerns over anti-Semitism and Holocaust memory in favor of closer engagement.

Poland’s decision to pull out, which effectively cancelled the summit and caused the other Visegrad, or V4, nations to downgrade their diplomatic visits to merely bilateral ones, came after several days of furious denunciations and diplomatic scrambling. Controversy began Friday, Feb. 15, when The Jerusalem Post reported that Netanyahu, in Warsaw for a conference on the Middle East, accused “the Polish nation” of collaborating with the Nazis. Netanyahu later clarified that he had not implicated the Poles collectively. The Post subsequently amended its story and it initially appeared that the crisis had been averted.

“No Compromise”
Katz’s comments, however, revived the diplomatic crisis. “I am a son of Holocaust survivors and I was even born and grew up in a community made up of Holocaust survivors,” Katz, a senior Likud minister just tapped by Netanyahu as acting foreign minister, said on Sunday. “The memory of the Holocaust is something we cannot compromise about; it is clear and we won’t forget or forgive.

“In diplomacy you try not to offend, but nobody will change the historical truth to do something like that,” Katz continued. “Poles collaborated with the Nazis, definitely. As Yitzhak Shamir said, they suckle anti-Semitism with their mother’s milk.”

Poland’s ambassador to Israel, Marek Magierowski, tweeted that he was astonished that Katz, who is the child of Holocaust survivors, had uttered “such a shameful and racist remark.” The Polish Foreign Ministry reprimanded Israeli Ambassador to Poland Anna Azari and is reported to be considering withdrawing Magierowski from Tel Aviv in protest.

Katz was unapologetic, telling i24 News that “no one will tell us how to express ourselves, or how to remember our fallen.” By early afternoon in Jerusalem the summit had been officially cancelled, a stunning reversal of last year when Netanyahu had appeared to endorse a Polish narrative of the war years and released a joint statement with his Polish counterpart, Mateusz Morawiecki, defending Poland’s wartime record. That statement was itself an effort to repair ruptured ties after Jerusalem condemned Poland for a controversial law that made it a crime to hold Poland responsible for Nazi crimes.

Yad Vashem Critical
The release of the joint statement led to an unprecedented rebuke of the prime minister from the usually apolitical Yad Vashem Holocaust memorial. It termed the joint statement “an offense not only to the historical truth, but also to the memory of the heroism of the Righteous Among the Nations.”

Yad Vashem has recognized over 6,800 Poles as Righteous Among the Nations for having risked their lives to save Jews — far more than in any other country.

Anti-Polonism Recognized
Netanyahu’s joint statement with Morawiecki last year also seemed to equate anti-Semitism with animus toward Poles, stating immediately after a condemnation of anti-Semitism that “both governments also express their rejection of anti-Polonism and other negative national stereotypes.” It was later reported in the Polish press that Morawiecki had emphasized that the declaration was the first that put anti-Polonism on the books as a recognized form of discrimination.

“One should read the current Polish reactions to Israeli expressions in this context. Polish officials stated it is racism since for them Israel confirmed that anti-Polonism and anti-Semitism are similar fundamental hatreds. This is just one problematic practical consequences of the joint declaration,” noted Havi Dreifuss, a historian of the Holocaust in Eastern Europe at Tel Aviv University.

Not Just Anti-Semitism
“Yet, one should also note that much of what was said lately in the Israeli media is far from being accurate,” she continued. “The fact that many Poles took part in harming Jews doesn’t mean that all Poles killed Jews. And the Holocaust was first and foremost the product of Nazi Germany and its murderous ideology. Moreover anti-Semitism was one important motive for Polish readiness to harm Jews, but was definitely not the only one. Updated research and the vast documentation available exposed how alongside Polish anti-Semitism, Jews were harmed for various reasons, including greed, revenge, terror and more. We must remember to describe the Holocaust and Polish Jewish relations in the Holocaust in a much more complicated manner.”

Addressing the controversy at a gathering of American Jewish leaders in Jerusalem on Monday morning, Feb. 18, Diaspora Affairs Minister Naftali Bennett said Jerusalem “deeply value[s its] friendship with the Polish government and people but we cannot in any way allow anyone to revise history. That’s not the way to build a good relationship.”

Victims And Perpetrators
While the Polish people were also victims of the Nazis, “they also had many Poles who were involved in anti-Semitism,” Bennett told members of the Conference of Presidents of Major American Jewish Organizations. He went on to describe how his wife’s grandfather’s mother and brothers were murdered near the end of the war by a gang of Polish teens.

According to Rafal Pankowski, a Polish academic and the founder of the Never Again Association, recent days have seen an uptick in anti-Semitic sentiment in Poland that appears to mirror the atmosphere that prevailed last year during the previous diplomatic crisis. During that period, local media engaged in rhetoric seen by many as anti-Semitic. Pankowski cited recent statements by journalist Rafał A. Ziemkiewicz, a host on state television, who tweeted to his 166,000 followers that the worst of it is that a man cannot even hate Jews in response” because this is what they want.

Another state TV personality, Jakub Pacan, announced that he believed that recent Israeli comments were the moral equivalent of Pearl Harbor.

No Equivalance
“We saw the dynamics last year so we know how it works more of less,” Pankowski told JTA. “It’s a kind of spark that activates the kind of prejudice and rhetoric that is ready made.”

Pankowski rejected the equivalence of anti-Semitism and anti-Polonism, saying that he had “never heard about anyone in Israel believing there is a Polish global plot against the Jewish people but I’ve heard many times in Poland people [stating] that there is a global Jewish plot against the Polish people.”

While acknowledging the complicity of “a number of Poles” in the Holocaust, the Union of Jewish Communities in Poland responded harshly to Katz’s words, saying in a statement that “accusing all Poles of anti-Semitism offends the Righteous; it also offends all those who today want to see in them the true representation of Polish society. And it also offends us, Polish Jews, who are a part of that society.”

Restitution Issues
“What do you want?” he replied when asked about the uproar in Poland. Katz “functionally said that all Poles are anti-Semites. So how do you expect the Poles to react? There are irresponsible people on both sides and when an irresponsible statement is made it empowers other irresponsible people to react. This in no way justifies anti-Semitism in Poland, just as it does not justify distortion of the truth by Israeli leaders.”

The Simon Wiesenthal Center’s  Efraim Zuroff, a harsh critic of Poland’s attempts to quash its complicated historical record, likewise reacted harshly to Katz’s statement, calling it “the kind of blanket generalization that should never be made.”

The diplomatic spat between Jerusalem and Warsaw also coincided with conflict over the issue of Holocaust restitution. On Sunday, Prime Minister Morawiecki rejected U.S. Secretary of State Mike Pompeo’s call “to move forward with comprehensive private property restitution legislation for those who lost property during the Holocaust era,” stating that the issue had been “definitely resolved.”

According to the World Jewish Restitution Organization, Poland is the only European Union member without such legislation.

“Jewish and non-Jewish rightful owners and their families have been waiting for many years for Poland to pass legislation to provide them some measure of justice for the property wrongfully taken from them in Poland,” the WJRO said in a statement. “We urge Prime Minister Morawiecki and his Government to seize this opportunity to do justice for those who lost so much.”

Addressing the Conference of Presidents on Monday evening, Netanyahu did not acknowledge the diplomatic breakdown that led to the cancelling of the V4 summit, instead praising himself  for expanding Israeli diplomatic relations around the world while pointing to a map labeled “expanding Israel’s diplomatic horizons.”

Poland remained on the map.

“There has been a tremendous change in Israel’s acceptance around the world by just about every country,” he said.