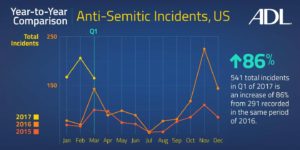 By MARCY OSTER and BEN SALES
NEW YORK CITY (JTA) – Anti-Semitic incidents in the United States soared 86 percent in the first three months of 2017 after rising by more than one-third in 2016, according to the Anti-Defamation League.There has been a massive increase in harassment of American Jews, largely since November, and at least 34 incidents linked to the presidential election that month, the ADL said in its recent annual audit of anti-Semitic incidents.

Bomb Threats To JCCs
This year has seen preliminary reports of 541 anti-Semitic incidents through March. One reason for the jump appeared to be the bomb threats called in to Jewish community centers and other Jewish institutions across the country. An Israeli-American teenager is accused of calling in most of them, and he has been charged in Israel and the United States. He is in custody in Israel.

Social Contract Not In Place?
Jonathan Greenblatt, the ADL’s national director, told reporters  that the numbers reflect growing assertiveness among a hard core of anti-Semites. “What appears to be happening is the extremists feel emboldened and are spreading their virus,” he said, adding that prominent white supremacists “like Richard Spencer and David Duke find themselves in the headlines, and their noxious ideas started to spread.”

Greenblatt and Moshe Kantor, president of the European Jewish Congress, said that a global wave of populism and corresponding backlash against elites is fueling anti-Semitism. Kantor added that resentment of globalization coupled with continuing economic struggles born of the 2008 recession are also contributing factors. Greenbelt said populist demagogues have been a boon to the extreme right, as “much of their rhetoric has been normalized in the past 12 to 18 months.”

“The social contract that worked well for the past 50 years is no longer in place,” Kantor said at the press briefing. “We as citizens of the developed world believed every new generation would live better than the previous one, so it is not surprising that well-to-do European societies are dominated by fear rather than values—fear of poverty, fear of migrants, fear for their lives amid terror attacks.”

Ramped-Up Security Helps
A study this month from the European Jewish Congress found that violent anti-Semitic incidents worldwide fell to 361 in 2016 from 410 in 2015, a decrease of 12 percent. Kantor attributed the decrease, which was most dramatic in Europe, to ramped-up security at Jewish institutions and more government funding for Jewish communal safety.

In 2016, the ADL report showed a total of 1,266 acts targeting Jews and Jewish institutions, with a 34 percent increase of incidents of assaults, vandalism and harassment over the previous year. Nearly 30 percent of those incidents, or 369, occurred in November and December.

The states with the highest number of incidents were those with large Jewish populations, including California, New York, New Jersey, Florida and Massachusetts.

Incidents on college campuses stayed mostly static after nearly doubling in 2015, but more than doubled in non-Jewish elementary, middle and high schools. The rise to 235 incidents in 2016 from 114 the previous year represented a 106 percent increase. There have been 95 incidents reported in the first quarter of this year.

Ignoring Cyber Hate
The ADL numbers do not include online anti-Semitism, including a wave of anti-Semitic harrassment on Twitter. A 2016 ADL report tallied 2.6 million tweets containing anti-Semitic language between August 2015 and July 2016. Greenblatt said Monday that the anti-Semitism statistics would be “off the charts” if cyber hate were included.

“Clearly, we have work to do and need to bring more urgency to the fight. At ADL, we will use every resource available to put a stop to anti-Semitism,” Greenblatt said in a statement. “But we also need more leaders to speak out against this cancer of hate and more action at all levels to counter anti-Semitism.”

Separately, Tel Aviv University’s watchdog on anti-Semitism  has reported that the number of anti-Semitic incidents worldwide has decreased by 12 percent in 2016 despite the spike in the United Kingdom and the United States.

The State Attorney’s Office in Israel told the Justice Department that although the 18-year-old is suspected of committing crimes in 10 countries, he will be tried in Israel, Israel’s Channel 2 first reported Sunday, April 23. The report added that the U. S. has not backed off its request and that Israel’s denial has not caused a rift in the relationship.

The teen from Ashkelon, in southern Israel, who was arrested in Israel last month for allegedly making over 100 threats against Jewish sites in the U. S., has been named in the U. S. but cannot be named in reports originating from Israel.

Israel’s State Prosecutor’s Office is expected to file a indictment against the teen, Channel 2 reported, including charges of extortion with threats, causing panic and money laundering.

Channel 2 News reported Saturday night that the teen said during interrogations in Israel that he had offered his “threat services” for payment.

The Justice Department said Friday that it was charging the teen with 28 counts of making threatening calls to JCCs in Florida, conveying false information to the police and cyberstalking.

“Today’s charges into these violent threats to Jewish community centers and others represent this department’s commitment to fighting all forms of violent crime,” Attorney General Jeff Sessions said in a statement Friday.

The teen’s parents and attorney have said he has a benign brain tumor that affects his behavior.

Israel has complied with requests to extradite Israelis since the 1990s, given that those sentenced to serve in prison can do so in Israel, according to Haaretz.