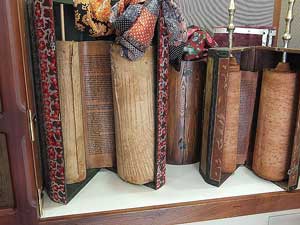 By LYN JULIUS (JNS) – On or around Nov. 30, Jewish communities around the world will hold events to remember the mass exodus of Jewish refugees from Arab countries and Iran. Almost a million people were displaced in the past 50 years, leaving billions of dollars’ worth of property behind.

Whose Cultural Heritage?
Not only have Arab governments never compensated Jews for their stolen homes and businesses, they are waging a pernicious campaign to claim communal property and Jewish heritage as their national patrimony.

Synagogues can’t be moved and clearly, it is better for Arab states to preserve them as memorials to an extinct community than not at all. However, these states are also declaring Torah scrolls, communal archives and books to be part of their cultural heritage.

For instance, the Egyptian government claims that all Torah scrolls and Jewish archives, libraries, communal registers and any movable property over 100 years old are “Egyptian antiquities.” However, Jews consider Torah scrolls their exclusive property. It is forbidden to buy or sell them. Fleeing Jews have often prioritized scrolls and books over their personal possessions.

International Law
What does international law have to say? The Hague Convention of 1954 “protecting cultural property in conflict” was brought in to stop the massive looting that has always occurred in war and specifically during WWII. There is also the post-colonial understanding that the new states that emerged in the 20th century have ownership of their own cultural heritage; the days when Britain could ship the Elgin Marbles from Greece, or Napoleon could plunder ancient Egyptian obelisks as “war booty,” are over.

In Egypt, registers of births, marriages and deaths of Jews from Alexandria and Cairo dating back to the middle of the 19th century were once kept in the two main synagogues in each city. But in 2016, government officials took away the registers to be stored in the Egyptian National Archives.

Support Of Egyptian Jews
Egyptian Jews living abroad cannot even obtain photocopies of certificates, often the only formal Jewish identification Egyptian Jews have to prove lineage or identity for burial or marriage. Repeated efforts since 2005 to intercede with the Egyptian authorities have come to nothing.

Egyptian government policy has been backed by the tiny remnant of the country’s Jewish community. Its leader, Magda Haroun, intends to leave the community’s assets to the government. She has even suggested that two paintings in the Louvre once owned by an Egyptian Jew should find their way back to Egypt.

Under the Iraqi dictator Saddam Hussein, thousands of books, manuscripts and other documents were seized from Jewish homes, schools and synagogues and stored at the headquarters of Iraq’s secret service in Baghdad. In 2003, the archive was discovered in the flooded basement after the building was bombed by the Americans.

Iraqi Jews Fight to Recover
The Americans shipped the archive to Washington, D.C., for restoration and hastily signed a diplomatic agreement promising to return the material to the Iraqi government. The United States spent over $3 million to restore and digitize the archive, which has since been exhibited across the country. The collection includes a Hebrew Bible with commentaries from 1568, a Babylonian Talmud from 1793 and an 1815 version of the Jewish mystical text Zohar, as well as more mundane objects such school reports and a Baghdad telephone book.

Although tens of thousands of Iraqi documents were shipped to the United States, the Iraqi government has only formalized its claim to the 2,700 books and 30,000 documents of the water-stained archive, which it claims are the country’s “precious cultural heritage,” a last emotional link with its ancient Jewish community and a reminder of Iraq’s former diversity.

The Iraqi Jewish community in exile has been waging a bitter battle to recover the collection and prevent it being sent back to Iraq. They say that to return the archive, which was seized from Jewish community offices, schools and synagogues, would be like returning property looted by the Nazis to Germany.

U.S. Signed MOUs
The Iraqi and Egyptian cases are symptomatic of a larger problem. Since 2004, the United States has been bound by law to impose import restrictions on archaeological and ethnological material that constitutes a country’s cultural heritage and has signed Memoranda of Understanding (MOUs) to this effect with Algeria, Egypt, Syria and Libya. In January 2018, the International Council of Museums released a “Red List” for Yemen aimed at protecting Hebrew manuscripts and Torah finials from leaving the country. All but 50 Jews have fled the country, taking what possessions they could, but even these ultimately could be returned to Yemen.

“These MOUs claim to be about [stopping] looting, but their broad scope and limited evidence of success suggests their real impact is providing a legal vehicle to legitimize foreign confiscations and wrongful ownership claims. … The MOUs are based on a flawed premise. It is the heritage and patrimony of 850,000 indigenous Jews who fled their homes and property under duress,” said Sarah Levin of the California-based Jews Indigenous to the Middle East and North Africa (JIMENA).

Owners Still Alive!
It is understandable that the international community should wish to prevent the looting and smuggling of ancient artifacts and their sale on the international art market. That is how Islamic State financed much of its conquest of northern Iraq and Syria. But there is a distinction between theft for financial gain, and legitimate salvage of Torah scrolls or books taken by fleeing Jews to be used for prayer.

Eight Sumerian artifacts sold to the British Museum were recently sent back to Baghdad. But the Iraqi-Jewish archive does not belong to some long-extinct civilization—some of the owners are still alive.

International law is based on the outmoded assumption of territorial sovereignty. It needs updating, specifically to resolve the tug-of-war between minority and national heritage, where the minority has been persecuted and displaced.

Lyn Julius is the author of “Uprooted: How 3,000 years of Jewish Civilization in the Arab World Vanished Overnight” (Vallentine Mitchell, 2018).