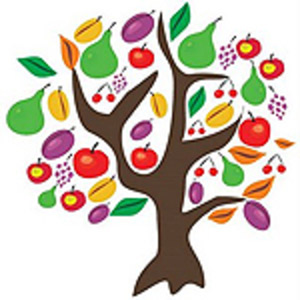 2. The centrality of trees is reflected by the date of Tu Bishvat, which is during the week when Jews commemorate the receipt of the Torah (the Five Books of Moses), including the Ten Commandments (Exodus chapters 13-17).

3. Tu Bishvat (the 15th day of the month of Shvat – full moon, just like the holidays of Passover, Tabernacles, Purim) is one of the four Jewish New Years:

*The first day of the Jewish month of Elul – the tithing of cattle during the days of the ancient Temple.

*The first day of the Jewish month of Tishrei – Rosh Hashanah.

*Tu Bishvat, the 15th day of the Jewish month of Shvat (January 21, 2019), whose zodiac is Aquarius (water bucket in Hebrew, דלי), is the New Year of the trees, highlighting the rejuvenation of trees. The cold, rainy season is winding down, sap starts to rise and fruit begins to ripen. Israel’s Legislature (the Knesset) was established on Tu Bishvat 1949.

5. Another Hebrew word for tree is Ilan (אילן), whose Hebrew root is ,איל which means (in Hebrew) awesome/mogul as well as the majestic Ram.  The first and third letters (אל) mean God and the second letter (י) is an acronym for God.  The Hebrew spelling for the rugged, Biblical terebinth and oak tree is אלה and אלון, both starting with the two letters, אל (God in Hebrew).

6. According to Deuteronomy 20:19/20: “When you besiege a city… you shall not destroy its trees….; for you may eat from them, and you shall not cut them down, since the human-being is a tree of the field… Only the trees which you know are not fruit trees you shall destroy and cut down….” Psalms 1:3 states: “He shall be like a tree planted by the brooks of water, that brings forth his fruit in his season; his leaf also shall not wither; and whatsoever he does shall prosper.”

7. Human-beings are better off emulating trees: deep roots and a strong trunk to grow and withstand threats and challenges; humility; extending shade and fruit to the needy; long-term thinking; patience in face of adversity.

8.  Proverbs 3:18 refers to the Torah as “the tree of life to those who cleave to it.”  The Tree of Life and the Tree of Knowledge are mentioned in Genesis 2:9 (the expulsion of Adam and Eve from the Garden of Eden).

9. Trees were created on the third day of Creation, the only day which was blessed twice by God (Genesis 1:11).  Leviticus 19:23 stipulates: “When you come to the Land, you shall plant fruit trees.”

10.  Tu Bishvat is not mentioned in the Bible, but in the Mishnah – the collection of Jewish oral laws, compiled by Rabbi Yehudah HaNassi, the Chief of the Sanhedrin (Judiciary and Legislature) around 200 AD.

11.  The almond tree, which blossoms earlier than most trees/fruit, ushers in Tu Bishvat.  The almond tree commemorates the rods of Moses and Aharon (the symbol of shepherds’ authority), which were endowed with miraculous power during the Ten Plagues which afflicted Pharaoh, the ensuing Exodus and the Korach rebellion against Moses.

12.  On Tu Bishvat, it is customary to eat – for the first time – fruit of the new season, particularly the 30 types of fruit growing in the Land of Israel, while maximizing happiness and minimizing sorrow.