Are American Jews disturbed by Netanyahu’s embrace of Trump? 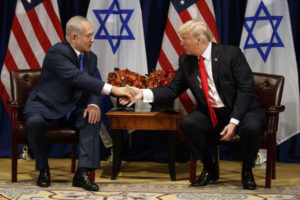 DC Report
By Douglas Bloomfield
A toxic United States president and scandal-riddled Israeli prime minister seem to be doing their best to diminish their respective nations’ status in the world, and in the process are widening the gulf between Israel and American Jews.

In Washington, the latest sordid chapter was the removal of Interior Secretary Ryan Zinke, who got the boot because of 15 or so separate ethics and potential criminal investigations, with more to come when the Democrats take over the House of Representatives in January and subpoena him to answer some tough questions under oath.

Rift Between Israel, American Jews
Trump was not particularly troubled by Zinke’s selloff of America’s natural resources to the nation’s worst polluters, since pleasing the polluters is high on his administration’s agenda.

Zinke’s alleged ethical lapses are pretty much par for the course for this administration. So it’s hardly a surprise that two of Trump’s best friends on the international scene are Benjamin Netanyahu and Saudi Crown Prince Muhammad bin Salman.

This contributes to the widening rift between Israel and American Jewry. The recognition of Jerusalem as Israel’s capital and moving the U.S. Embassy there were popular actions, but not enough to change the fact that more than three in four Jewish voters oppose Trump because they feel that he’s the opposite of virtually everything they believe in. That only makes Netanyahu’s embrace of Trump more troublesome for them.

With Friends Like These…
The two leaders also are close to Hungary’s Prime Minister Viktor Orban. He is an authoritarian leader who speaks well of Israel but indulges growing right-wing fascism and anti-Semitism. The trio share another target, George Soros, the Hungarian born, Jewish philanthropist and supporter of liberal causes.

Jews are repelled by Trump’s seeming embrace of white supremacists, his xenophobia, anti-immigration policies and his brand of nationalism.  His America First message is a painful reminder of an anti-Semitic movement in the 1930s with that name.

Some of his other friends aren’t too appealing either.

Trump borders on unctuousness toward America’s adversaries like Vladimir Putin, Kim Jong Un and Xi Jinping, with whom he shares an autocratic bent, nationalist fervor, intense enmity toward his critics and hostility toward the media. All also are allies of Israel’s enemies.

In England Trump dissed the queen and protestors flew a giant diapered blimp caricature of him. That is the least of the problem. Interviews with foreign leaders and policy makers as well as American experts in American and foreign publications paint a disturbing picture of the president and his administration.

Foreign leaders are troubled by his behavior and ignorance.  They paint a disturbing picture of a man moored in his preconceptions, having a minuscule attention span, trouble grasping complex issues, and unable or uninterested in learning.

They see him willing to take Putin’s word over his own intelligence services. They fear he is doing Putin’s bidding, consciously or otherwise, in threatening to break up the EU and NATO — two organizations Israel wants to see succeed and aspires to join.

Trump prefers autocrats and strongmen, but that doesn’t always work out as he would like.

His relationship with Putin, despite all the wooing and cooing during the campaign, fizzled and today threatens to destroy his presidency.

Kim played him for a fool and all the world seems to know that— but Trump.  Not only has there been no progress on denuclearization, but Trump is softening his negotiating position, which should seriously worry Israel because it might signal a weakened U.S. position regarding Iran.

Trump started a trade war with China and then lied about negotiating a deal, sending the stock markets into a wild roller coaster ride and our 401(k)’s into a nosedive. Not even a serving of the “most beautiful piece of chocolate cake” at Mar a Lago helped.

Growing Israeli Worries
A new U.S.-Israel crisis is brewing over Israel’s deal with China involving Beijing’s contract to manage the port of Haifa. It could mean the U.S. Navy will stop using Israel’s largest port city for visiting warships and joint training exercises.

As China and Russia make inroads into the Middle East and the U.S. pivots toward Asia, Israeli worries grow and America’s relations with close allies — France, Britain, Germany, Canada — continue to deteriorate.

It is visible in America’s shrinking international stature and leadership. Netanyahu of all people should understand this. He may phone Putin regularly, sell top technology and lease ports to China and woo assorted autocrats, but when the proverbial substance hits the rotary device, Israel’s most valuable asset is not a thin-skinned, egotistical, pathological liar facing criminal investigations into every aspect of his life, but the American Jewish community that the prime minister perilously takes for granted.