Are we facing decay of small-town life? 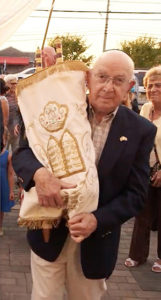 As the sale of his synagogue in Latrobe, Penn approached, Mickey Radman, 82, the backbone of his vanishing congregation of 10, asked a friend in Long Beach Island, NJ if he and the growing congregation there will take the Torahs. Radman is seen here as part of that bittersweet presentation. Despite the seeming inevitable disappearance of the Latrobe Jewish community, its legacy, as symbolized by the Torahs, will be continued. 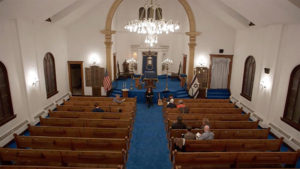 Sparse congregation gathers for the High Holidays in Butte, Mont.

I was  moved by the stories and the similarities to what we and many other small Jewish communities are facing. I also identified with some of the characters who sense a calling to keep their synagogues and Jewish communities alive,” said Mark Hoffman, president of Shaaray Tefila of Glens Falls, organizer of the program, as he explained to The Jewish World why he helped bring the 2016 documentary “There Are Jews Here,” to the area.

“There Are Jews Here,” will be screened on Sunday, May 21, at 2 p.m. at the Crandall Library, 251 Glen St., Glens Falls. The film is free and open to the community. No tickets are required.

The documentary depicts four once thriving United States Jewish communities that now struggle to hold a prayer service. How did it happen, and what can be done to ensure survival of the communities?

In Latrobe, Penn. the closing of the synagogue is chronicled through the story of longtime member Mickey Radman who keeps the doors open long enough for the bat mitzvah of the shul’s oldest member’s granddaughter.

In Butte, Mont., Nancy Oyer tries to maintain her community while struggling with health problems.

In Laredo, Texas, a young interfaith couple consider if their community can be revived, or if it is time to move to San Antonio to join a community that can nurture the spiritual growth of their family. 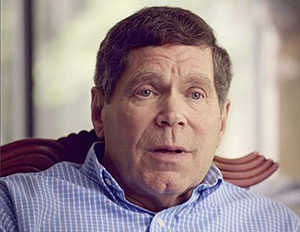 He wanted to do something! Larry Blumberg, hotelier, put up money to attract new Jewish families to Temple Emanu-El of Dothan, Ala. Applying families are evaluated, courted and offered up to $50,000 to relocate and join the congregation. The money starts as a loan, but if the family stays five years it becomes a grant.

Can demographics be challenged? Dothan, Ala. Jews offer up to $50,000 for Jewish families to join its community and one family finds a home there.

The focus on the four  stories presents, in effect, a microcosm of what is happening across the U.S. as once— dynamic congregations dwindle for a variety of reasons and the remaining Jews must come to terms with the changes and new challenges of maintaining community, faith, and houses of worship.

The filmmakers report that there are about one million Jews living outside of major U.S. cities and show that for those in small towns the crisis of what to do now is often more apparent and immediate.

Mark Hoffman, who indicated the support of Cong. Beth El of Glens Falls and Cong. Knesseth Israel of Gloversville in arranging for the screening, added, “Although we are not struggling  as desperately as the communities that are depicted in the film and we have made some recent strides at rejuvenation, I think the movie is a wake-up call to those who might be tempted toward complacency and assume that our Jewish institutions and communities will always be there for us. I hope to engage the audience in discussion after the showing to stimulate thinking about how and why we can keep small town Judaism alive and vibrant.”

Rabbi Shmuley: We Do Not Forget — President Trump Promised Jerusalem
Misplacing items, but holding on to the important stuff— Marilyn is no Sherlock Holmes