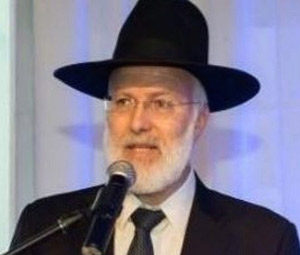 Chief Rabbi of Argentina Gabriel Davidovich who was recently attacked and beaten  in his home. Photo courtesy of Screenshot/Twitter.

By DAN LAVIE and YORI YALON
(Israel Hayom via JNS) – Argentina’s Chief Rabbi Gabriel Davidovich sustained serious injuries on Monday, Feb. 25. when a group of burglars entered his home in Buenos Aires. His wife was tied up during the incident, according to the local Jewish umbrella organization AMIA in a statement.

Burglary Or Bias?
Although it unclear whether this attack was motivated by anti-Semitism, there is a growing suspicion that he was targeted because he was Jewish. AMIA said that the attackers “savagely” attacked him and even told him that they knew he was the most prominent Argentinian rabbi.

Argentina’s La Nación newspaper reported that police would investigate the incident as a robbery, despite calls from the Jewish community to investigate it as a hate crime.

Davidovich was taken to the local hospital and, according to the local media, he has nine broken ribs and a punctured lung.

Israeli Prime Minister Benjamin Netanyahu and many other officials in Israel condemned the attack.

“I send wishes for a quick recovery to Argentina Chief Rabbi Gabriel Davidovich and his wife who were viciously assaulted,” posted Netanyahu on Twitter. “We must not let anti-Semitism rear its head. I strongly condemn the recent acts of anti-Semitism and call on the international community to take action against it.”

Prayers Not Enough
Education and Diaspora Affairs Minister Naftali Bennett wished Davidovich and his wife a speedy recovery, but said in an English-language statement that “thoughts and prayers are not enough,” and that “the leaders of the world in Europe, in South America, all over are failing in their responsibility to learn the lessons of the past.” Bennett asserted that “a strong Israel is the only answer: Our enemies should know, Jewish blood is not cheap.”

“The wave of anti-Semitism is sweeping the free world, and the Jews in the diaspora are no longer safe outside of Israel’s borders,” said Yael Eckstein, president of the International Fellowship of Christians and Jews.

Isaac Herzog, chairman of the executive of the Jewish Agency for Israel, released the following statement: “Wishing Rabbi Davidovich a full recovery from the brutal attack he and his wife endured in their Buenos Aires home. We must relentlessly fight this disgusting hatred. The Jewish Agency, together with the government of Israel and other Jewish organizations, will embark on a battle against the alarming rise of anti-Semitism across the globe.”

Another fight over Holocaust memory threatens what had been warming ties between Israel and Poland
How did Jews fare during the Crusades? Lecture March 7 at University at Albany