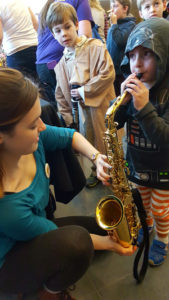 Eamon Avi Lewis-Clevenson tries out the saxophone at the John Keal-sponsored “instrument petting zoo” prior to the Albany Symphony’s Star Wars “opera” at Skidmore College Jan. 28.

In “Star Warriors: The Last Maestro,” the Evil Emperor has outlawed all music in the galaxy. But, from the far reaches of a distant solar system, a mysterious wanderer appears to rally the “resistance,” a small troupe of singers, to harness the force of song and destroy the Emperor’s power. Is he “The Last Maestro?” Kids, many dressed in “Star Wars” costumes, were invited to help him use the force of music to save the universe from the “Sound of Silence…”

Our four-year-old, who loves music, and earlier in the day was singing along with “Eine Kleine Nachtmusik,” did not cotton to the operatic singing, so we decided to cut our losses and leave after about half an hour. He did enjoy the opening barrage of the “Star Wars” overture, which sounded great in the Zankel auditorium.