Auditions for ‘The Diary of Anne Frank’ slated for June 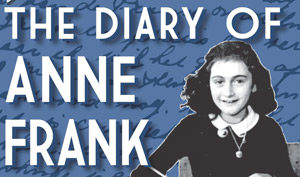 The Classic Theater Guild has announced June auditions for the cast of  “The Diary of Anne Frank.”  Performances of Wendy Kesselman’s adaptation of the original Goodrich and Hackett script will be in November at Beth Israel Synagogue in Schenectady.

Callbacks, if needed, will be the following week.

Characters to be cast are:

Anne Frank– Actress must be able to portray a 13-15 year old,

Those planning to audition are asked to prepare a one-minute dramatic monologue and to not use Shakespeare and script monologues.

Information may be obtained from William Wilday at wwilday@nycap.rr.com.