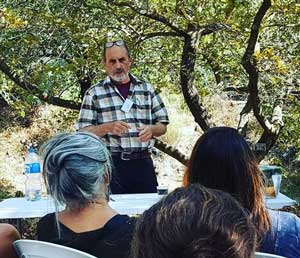 By SHIRYN GHERMEZIAN
(JNS) – The first international herbalist conference in Israel, set to take place beginning Feb. 9, is facing threats by supporters of the anti-Israel BDS movement, which has already persuaded some professionals to pull out of the event.

Herbalists from around the world are expected to attend the three-day Ancient Roots Herbal Conference in Ana Poriya, Israel, but two confirmed speakers—7Song, a Russian-Jewish herbalist from America, and Danny O’Rawe from Northern Ireland—have withdrawn their participation. They did so after receiving ultimatums from BDS supporters, who threatened to close their clinics, call their clients and bash them on social media, according to Sara Chana Silverstein, an Orthodox Jewish master herbalist from New York who still plans to speak at the conference.

She told JNS that BDS supporters sent threatening e-mails to conference speakers, as well as to “hundreds” of nonparticipants, to cause them to boycott the event and not attend next year’s conference.

“The whole goal of this conference was to bring international herbal research to Israel,” said Silverstein. “For BDS to attack this conference limits knowledge for the world.”

Herbalism is the study of botany and the use of medicinal plants, which have been used throughout human history to provide treatment for various ailments.

The conference in Israel was announced in the summer of 2019 with the modest goal of selling 50 to 75 tickets to break even on associated costs.

Rivkah Asoulin, one of the organizers living in Israel, said the event was originally supported by Bevin Clare, president of the American Herbalists Guild, a prominent herbalist association. Clare even agreed to film a video promoting the event, which Asoulin then posted online.

But in January, Clare asked Asoulin to remove the video, saying she received nearly two-dozen hostile e-mails, many from AHG members, that criticized her support of the conference and said she should have received approval from the AHG Board before creating the clip, reported Hamodia.

According to the publication, “Asoulin said that Clare told her she understood the difficulties of putting on an international herbalist conference and that she felt for organizers, but, ‘Rivkah, in life we have to choose our battles, and I’m not going to choose Israel.’ ”

When news spread of supporters pulling out of the event, conference organizers expressed dismay. “Sadly, some of our 2020 speakers and supporters have been falsely led to believe that supporting Ancient Roots Israel would be a wrongful political statement, and they have become the target of serious harassment endangering their work and livelihood by a campaign that is fostering the politics of division,” they said in a statement.

“Ancient Roots believes in talking to everybody, no matter what their convictions, and we regret that said group has not contacted us directly and explained their grievances and given us a chance to accommodate their concerns and instead issued boycott, demands and other threats to the very people who wanted to do what they believe in, which is sharing herbal medicine with all peoples, throughout the world. We herbalists are concerned with people and plants, not with politics.”

“The choice of targeting our non-commercial, non-political activity, and thus trying to stop herbalists from gathering to further their knowledge of ways to improve the lives and health of 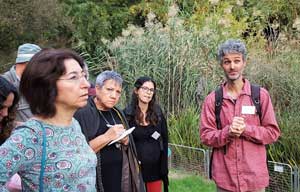 people around the world, is indeed troubling and unethical. Once again, we see something started with good and noble intent derailed by the politics of division that is sweeping the world.”

Leading the BDS effort is Shabina Lafleur-Gangji, an herbalist who was recently hired as the editor of the Journal of the American Herbalists’ Guild.

“I am someone who *absolutely* stands behind the BDS movement,” Lafleur-Gangji wrote in a Facebook post. “We decided something needed to happen and reached out to the herbalists involved. Within 24 hours they both made the decision to retract their support for the conference in solidarity with folks in living under the brutal force of Israeli apartheid.”

In the same post, Gangji thanked Clare, six other herbalists “and everyone else who put their time and energy into” their campaign to convince herbalists to withdraw participation in the event. She ended her post with “#freepalestine #bds #rightofreturn and #untilweareallfree.”

“Israel is at the forefront of innovations for medical research,” said Silverstein. “What we as botanical medicine experts want to do is to bring that knowledge to Israel because we know they’re going to take it and make it worldwide. I think that’s why the BDS attack is so daunting; herbalists that would want to come to next year’s conference are going be intimated because Shabina also reached out to them. So for next year, other herbalists who would have been thrilled to come are now going to be intimidated.”

In a statement to JNS, the American Herbalists Guild distanced itself from Clare and Lafleur-Gangji. The Guild said Lafleur-Gangji holds “a contractor position” and is “not an employee of the AHG,” adding that “the views and opinions expressed by AHG contractors, employees and board members on their personal blogs, publications, websites and social media are solely their own and do not necessarily reflect the policy or position of the American Herbalists Guild as an entity.”

AHG also claimed that it was not aware of the Ancient Roots conference, “nor of any perceived or implied endorsement of this event. Nor were we a part of any withdrawal or boycott.”

The Guild said, “The actions by individuals associated with the AHG were made independent of consult by the organization. … Be assured the situation at hand has prompted an internal dialogue within the organization and its leadership, and a review of our social-media policies and all perceived and implied endorsements by any employees, officers, contractors and staff is a priority.”