Bernie Sanders: Some U.S. aid money to Israel should go to Gaza 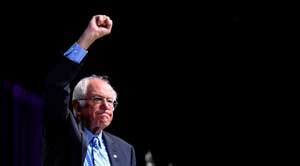 By RON KAMPEAS
WASHINGTON (JTA) — Democratic presidential candidate Bernie Sanders earned cheers at J Street’s annual conference when he said some of the money Israel receives from the United States for defense assistance should go to humanitarian relief in the Gaza Strip.

The liberal Jewish Middle East policy group as one of its conference themes this year wants to press the Democratic candidates on whether they would demand from Israel an end to settlement expansion as a condition of receiving U.S. aid.

Among the five candidates to speak in person at the conference, Sanders, the Jewish senator from Vermont, was the most robustly in favor of pressuring Israel. The others who spoke live at a convention center here were Sens. Amy Klobuchar of Minnesota and Michael Bennet of Colorado; Pete Buttigieg, the mayor of South Bend, Indiana; and former U.S. housing secretary Julian Castro.

“I would use the leverage, $3.8 billion is a lot of money and we cannot give it carte blanche to the Israeli government, or any government,” Sanders said.

Asked specifically how he would address the humanitarian crisis in the Gaza Strip, which is under the control of the Hamas terrorist group, Sanders said, “My solution is, [to say] to Israel, if you want military aid, you’re going to have to fundamentally change your relationship to the people of Gaza. I would say that some of that $3.8 billion should go right now to humanitarian aid in Gaza.”

Buttigieg and Warren also supported using the assistance as a means to pressure Israel, although in more restrained terms. Biden, Castro, Klobuchar and Bennet said leveraging the aid would be counterproductive.

Biden was perhaps the most emphatic in defending assistance to Israel.

“Israelis wake up every morning facing an existential threat,” he said in his video message. “That’s why we always have to be adamant that Israel must be able to defend itself.”