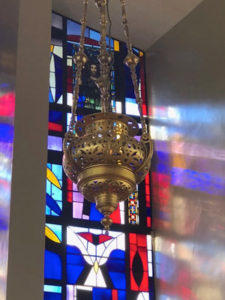 The Ner Tamid, pictured,  which is depicted in the 180th  anniversary logo, was brought from the temple building downtown to the current synagogue and hangs in the Beth Emeth sanctuary on Academy Rd.

ALBANY –As part of its 180th anniversary, Congregation Beth Emeth will recreate a Shabbat service like many held in its past, at 5:30 p.m. on Friday, June 1. The congregation, using the liturgy from the Union Prayerbook and music popular a century ago  will join to worship at the site of its former synagogue on the corner of Lancaster, Jay and Swan Streets in downtown Albany.

Rabbi Scott Shpeen and Cantor Jodi Schechtman will turn the clock back for a nostalgic return to a bygone era and a glimpse of what the congregation’s worship services were like for previous generations. The service, which is in keeping with the year-long 180th anniversary celebration’s theme “Yesterday, Today and Always,” is open to the community and all are welcome to attend.

“One of the highlights of our celebration of the 180th anniversary of Beth Emeth is returning to our former spiritual home and to conduct a Sabbath service there,” said Shpeen, spiritual leader of the congregation.

“For generations of our congregants, the old temple at the corner of Lancaster, Jay and Swan Streets provided rich and lasting memories of holidays, religious school and life cycle events that took place within those walls. It was there that so many celebrated joyous moments. It was there that sorrows were softened,” the rabbi added.

The downtown Richardson Romanesque-style temple, built in the late 1880s, is one of the few surviving 19th-century synagogues in the United States. Close to 200 families shared the cost of building Beth Emeth’s original temple when two synagogues Anshe Emeth and Beth El bridged their differences and decided to form one Reform congregation. It was explained that Beth Emeth’s connection to Beth El, which was formed in 1838 as a place of worship for Jewish immigrants who were trying to adjust to life in America, is what makes Beth Emeth’s history in Albany date back 180 years.

Beth Emeth’s growth in membership in the first half of the 20th century eventually led to the building of the 100 Academy Road temple 60 years ago. The Ner Tamid, or eternal light, that hangs in the current sanctuary, was brought from the downtown temple as a reminder of the congregation’s original synagogue.

Since the congregation left the site, the facility has served as the home for the Wilborn Temple First Church God in Christ. Beth Emeth and the church continue to share a fellowship and bond, according to the rabbi. The church’s Pastor Elder Solomon Dees, who has served the church since 2007, will deliver the benediction at the service.

Bus transportation will be available from Beth Emeth at 100 Academy Rd. One bus will depart at 4:30 p.m. for those who wish to explore the temple before the service. Buses will also leave the temple at 4:45 p.m. and 5 p.m. to arrive before the 5:30 p.m. service. Anyone interested in bus transportation, or with questions is asked to contact Deb Sokoloer at dsokoloer@bethemethalbany.org, or 518-436-8761, ext. 230.