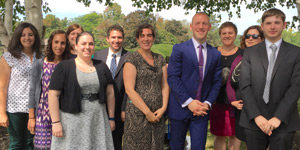 BY SUE WOLLNER
When Andrew Abramowitz joined Congregation Beth Emeth in Albany a few years ago it became clear as he looked around the sanctuary during services that he, a young man in his early 20s, was in the minority. A recent graduate of the University at Albany he was not surprised, knowing that his demographic group was the least likely to be engaged with a Jewish congregation.

“When I first came to Beth Emeth, the young adult presence wasn’t that strong,” Abramowitz reports.

Abramowitz, now 26, and a core group of friends began a campaign to mobilize their contemporaries to attend services together, organize social events and participate in community service activities.

Challenging The Demographic
The organization that they, and the congregation created, the TRIBE, was tailored to offer 20 and 30-somethings a cultural link to their faith.

“Our mission is to bring young adults into the congregation, provide them with a spiritual home, and a fun and meaningful connection to Jewish life,” Abramowitz said.

While millennials may have been involved with their congregations as children and teens and participated in Hillel and Birthright in college, it is common for them to disengage until they start their own families. They may be distracted by establishing relationships, building careers and often moving around the country in pursuit of better jobs.

Overall, congregational participation in the United States tends to attract an older demographic, which may make it less appealing for young adults who are often in a new environment away from their home congregation.

The TRIBE’s mission is not solely to get young adults to attend services. While some are more interested in the religious aspects of their faith like rituals and services, others just want a cultural and social connection with others in the region. “For many young adults this is their only connection to Judaism,” Abramowitz said. “We want everyone to feel welcome and comfortable,” he said.

Slew Of Activities
Since its inception in September 2016 when the TRIBE held its first social event at the Recovery Room in Albany, support for the group has grown. In its first year the TRIBE held a variety of social and cultural events with many organized around food. For example, the TRIBE holds regular potluck dinners after Shabbat services and has held several cook-off contests including a hummus cook-off, a matzah dessert cook-off at Passover and an apple dessert cook-off for Rosh Hashanah with members of the congregation’s brotherhood and sisterhood serving as judges. Other social events the group sponsored in its first year included whitewater rafting, hiking, laser tag, Israeli dancing, a fitness workout and trivia nights.

About 100 young adults attended events or expressed interest in the TRIBE in its first year, Abramowitz said. Between 50 and 70 people have attended at least a few TRIBE events so far, with a core group of regulars, he added. Most TRIBE members are single, but some are married. While the majority of members are affiliated with Beth Emeth, several come from other congregations in the region. It’s also common for members of the TRIBE to bring friends and spouses of all faiths to programs, according to Abramowitz.

Networking
Now in its second year, the TRIBE has a full board. The group is tech-savvy and communicates to its membership through Facebook, a weekly e–mail and advertisement through the temple and the Jewish Federation. The 2017-18 TRIBE board includes Andrew Abramowitz, president; Rachel Burnetter, vice-president; Emily Handelman, communications director; Brad Morris, membership director; and Gayle Abrams, finance director.

“In our second year our plan is to get more involved in Beth Emeth and find ways to collaborate with other groups and give back, especially for the 180th anniversary of the congregation,” Abramowitz said. For example, the group is holding a session on how to use Google Aps for the community at Beth Emeth at 7 p.m. on Thursday, Jan. 18.

Abramowitz is always looking to connect with other organizations of young people. Recently, the TRIBE organized a web exchange with young adults from the JCC in Krakow, Poland to share programming ideas.

Synergy
In early December, Abramowitz attended the Union for Reformed Judaism’s Biennial in Boston, Mass. where he networked with young adults from other congregations about their efforts to reach out to their peers. In recognition of his work with the TRIBE he received an honorable mention award called the Belin Award for Audacious Hospitality at the Biennial. The award is designed to honor URJ congregations with innovative programs that increase diversity in their congregations.

I look forward to seeing what other brainstorming we can do. We have a lot of synergy,” Abramowitz said.

The TRIBE has received moral support as well as some financial backing from the congregation for its programming. “The welcoming environment at Beth Emeth to its young adult members is a big factor in making us come back over and over,” he said.

Information about the TRIBE is on the group’s website, www.bethemethalbany.org or Brad Morris, membership director, at bamorris1991@gmail.com can provide details.