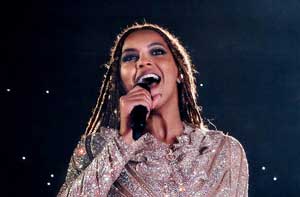 Beyoncé performing at Wembley Stadium in London in July 2016. Photo courtesy of Wikipedia.

By NAAMA BARAK
(Israel21c via JNS) – Beyoncé has done it again, producing a visual album called “Black Is King” and sending the world into an absolute frenzy. That’s good news for the Israeli designers featured in it, and whose creations—the word “clothes” won’t do them justice—have now reached millions of Queen Bey fans worldwide.

“Black Is King”was recently released as a visual companion to Beyoncé’s 2019 album “The Lion King: The Gift,” a tie-in album for “The Lion King” remake of that year. The 85-minute musical film showcases the album’s songs in one continuous flow and retells the story of the popular Disney movie to include and emphasize messages about racism, oppression and black pride.

Throughout the visual album, Beyoncé goes through a dazzling array of costumes created by both big fashion houses and upcoming designers, as well as outfits by three Israeli designers—superstar Alon Livne, designer Shahar Avnet and recent Shenkar graduate Avy Amram.

During the visual album, Beyoncé wears three looks by Livne: a crimson coat, a white, crocheted dress and a white winged, geometrical ensemble. Amram designed a metallic bomber jacket that was featured in the recently released song Already that’s part of the wider project. Avnet designed the pink dress that Beyoncé wore in the video for the song Spirit that was already released last year.

This latest collaboration with Israeli designers is not Beyoncé’s first. She previously wore both Avnet and Livne’s designs for her music tours, as well as gowns by Israeli designer Galia Lahav, including one for her