Robert Alter completes his translation of the Hebrew Bible 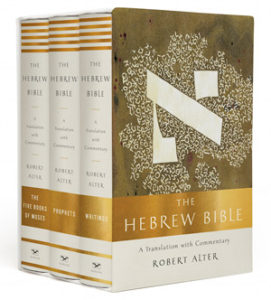 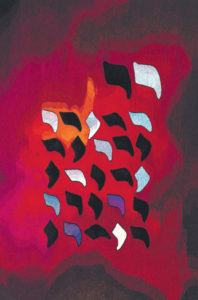 The cover art on each volume of the box set is from a series of tapestries featuring abstracted Hebrew letters by Israeli artist Mordecai Aron. Photo Courtesy of W.W. Norton & Company.

When God began to create heaven and earth, and the earth then was welter and waste and darkness over the deep and God’s breath hovering over the waters, God said, ‘Let there be light.’ And there was light.

So begins a monumental new literary translation of the Hebrew Bible by University of California Berkeley scholar Robert Alter. Yes, “welter and waste” — more on that later.

Most full translations of the Bible are done by teams of translators. Alter is the first person to complete a major English-language translation of the entire Hebrew Bible on his own.

He began, aptly, with Genesis, published in 1997. Since then, in fits and starts, he has translated several more books of the Bible. His full three-volume translation represents decades of work.

“Alter’s versions are not destined to replace the King James version; they are meant to strip away its familiarity, to help us see the biblical text more closely and accurately,” wrote the poetry and literary critic Adam Kirsch.

The results have been widely admired, but also widely debated. The late novelist John Updike was not a fan, writing in The New Yorker that in trying “to achieve absolute fidelity” to the original Hebrew, Alter “settles on rather odd English.”

But another novelist, Cynthia Ozick, loves his translation of the Five Books of Moses. “The poets will rejoice,” she wrote. “Alter’s language ascends to a rare purity through a plainness that equals the plainness of the Hebrew.”

Ron Hendel, a professor of Hebrew Bible and Jewish Studies at UC Berkeley who was the chief editor of “The Hebrew Bible: A Critical Edition,” praised the effort too saying that it is “the best translation of the Bible into English ever made,” said Hendel, who has taught courses with Alter. “And to do it as one person is an amazing achievement.”

Hebrew On The Bus
Alter, 83, went to what he calls “a typical Hebrew school” at a Conservative synagogue in Albany. By the time of his bar mitzvah, he was hardly a Hebrew speaker. “I could read the Hebrew alphabet, knew about 35 words and I could do my haftorah,” he said. “After that, I was about to ditch it entirely.”

But two Conservative synagogues in the area got together to create a more advanced class.

“I was a competitive guy, so I made a big effort. It was serious instruction,” Alter told J. in an interview at his Berkeley Hills home, where he works in a small “crow’s nest” office with a sweeping view of Berkeley, the Bay and San Francisco.

While an undergraduate at Columbia University, he continued studying Hebrew at the Conservative Movement’s Jewish Theological Seminary, just up the street. And there he had a notion.

“It was the crazy kind of thing you do when you’re 18: I decided I would achieve a complete mastery of the Hebrew language, Alter said. “So I took a Hebrew dictionary, and I decided I was going to commit it to memory.”

That went on for a little while, but as it turns out, there are a lot of words that begin with aleph.

“I would write down every word I didn’t know, no matter how obscure, on flash cards, and I would study them,” he said. Alter traveled to the Bronx every day for track practice, and the bus was a perfect place to study. “After about a year and a half, I was barely finding words I didn’t know.”

Hebrew-language study became central to his Jewish identity, but for most of his professional academic career he was firmly ensconced in the world of English and other Western literature. In 1962 he earned a doctorate in English literature at Harvard. In 1967 he came to UC Berkeley, where he has been ever since, currently as a professor of Hebrew and comparative literature.

Until the 1980s he worked on novels of Europe, America and modern Israel, delving into authors like Franz Kafka, Saul Bellow and S.Y. Agnon. And then came the Bible.

Common Bible Scholarship
“I wrote a feisty piece complaining that Bible scholars spent all their time hunting down Akkadian loanwords hidden in the text, but they didn’t know how to read a story,” Alter said. “They study all kinds of useful things. Historical facts, archaeology — they pick up a couple of ancient languages, Akkadian and Egyptian. But one thing that is never studied is style.”

Alter figured the piece, published in Commentary, would be a one-off, a small blip in his career. “But then I started receiving an outpouring of letters,” he said. It had struck a nerve. “I had a few more ideas about it, so I kept going.”

Then, in 1982, he wrote The Art of Biblical Narrative. There had been two common approaches to the Bible: It’s either a sacred revelation whose existence is to be taken at face value, or a historical artifact to be dissected and contextualized. But in The Art of Biblical Narrative, Alter proposed a third way: Analyze the Bible as an interconnected series of works of literature using the tools of literary analysis, as he had been doing with Western novels in his career to that point. At the time it was revolutionary. He looked at the Bible not as sacred, not as historical, but as artistic.

The book was recognized immediately as a gem, hailed by critics and colleagues as revolutionary. It earned the 1982 National Jewish Book Award in Jewish thought. In terms of academic volumes, it was a sales sensation. It has been in print more or less continuously since it was published.

Hendel said Alter’s literary approach to reading the Bible has contributed significantly to how the Bible is taught today in academic settings.

An Offhand Commission
One book about the literary style of the Bible is a far cry from a handsome three-volume translation of the whole thing. You’d expect a weighty undertaking such as this to have been a lifelong goal. But Alter didn’t set out to do it. In fact, the project was more or less an accident.

“But the problem is, there’s something really wrong with all of the existing translations,” he told the editor. “If I were to do this, I’d have to do my own translation.” Alter said it without thinking twice about what he was getting himself into.

“I’d been reading the Bible in Hebrew since my teens, and the beauty of the Hebrew spoke to me in all sorts of ways,” he said. “I wanted to see if I could get more of that into English than English readers have been able to see so far.”

Which brings us back to “welter and waste.” The Hebrew term he renders in English is “tohu vavohu.” In his commentary, Alter wrote: “Tohu by itself means ‘emptiness’ or ‘futility,’” while vavohu appears nowhere else in the Bible — “coined to rhyme with the [tohu] and reinforce it, an effect I have tried to approximate in English by alliteration.” Hence, welter and waste.

Compare the elegance of his solution, bringing to the English reader the sonic poetry of the Hebrew, with this from the 1985 Jewish Publication Society translation of tohu vavohu: “unformed and void.”

Alter’s Genesis turned out better than he had expected and was well received. “So I said, ‘I think I’ll do one more,’” he recalled.

That one more was The David Story, which included the books of 1 Samuel and 2 Samuel, largely concerned with the life of King David. Published in 2000, the translation’s David comes across like a true literary character, flawed and heroic.

In 2008, Alter expanded his translation of Genesis and did The Five Books of Moses: A Translation with Commentary. In 2009 came The Book of Psalms. In 2011, The Wisdom Books: Job, Proverbs, and Ecclesiastes. 2014: Ancient Israel: The Former Prophets: Joshua, Judges, Samuel, and Kings. 2016: Strong as Death Is Love: The Song of Songs, Ruth, Esther, Jonah, and Daniel.

His translations are read by a broad range of audiences, Jewish, Christian and otherwise — academics and their students, readers of literature, and devotees of the Good Book.

The Big Picture
The Hebrew Bible: A Translation with Commentary is proudly displayed on a coffee table in Alter’s home,. The final product is a boxed set — beautiful and colorful, with artwork adapted from a series of 10 tapestries designed in the late 1970s by the Israeli artist Mordecai Ardon.

The boxed set gathers all of his previous translations, plus a few books he had been putting off — including works that stretch his idea of the Bible as literature almost to a breaking point, small pieces of the big picture but a slog to translate.

“Listen, the first nine chapters of Chronicles 1 is nothing but a list of names,” he said. “You can’t call that literature. And what is there to do as a translator? Not much other than transcribe the names. You just have to get through it because you can’t decide to edit out part of the Bible.”

Alter doesn’t think much of Leviticus, either, with its long passages on priestly conduct and procedures for ritual slaughter. “I don’t even like going into butcher shops, and here I am translating all the instructions for cutting up the animals,” he said.

But ask about his favorites, and Alter all but cruises through the table of contents.

“I love Genesis,” he began. “And I love Psalms and David’s story. And then there are later books. Kohelet [Ecclesiastes] speaks very strongly to me. And Job, of course, the poetry is amazing …”

And then there’s his pride in his translation of a mysterious word in the Samson story, one that appears only twice in the Bible: “halitsah.” It’s generally agreed that it refers to clothing, sometimes translated as tunic or simply garment, but identifying it more specifically has long given translators a good deal of trouble. Alter, however, offers a novel translation.

In the story, Samson carries 30 of these unclassified garments after striking down the men wearing them. By comparing it with the only other instance of the word in the Bible, Alter identifies it as a kind of armor — a translation that brings new meaning to the story. The image of Samson carrying 30 sets of armor reinforces his legendary superhuman strength.

Alter believes that he is the only person in history to have translated it accurately. “I’m 100 percent certain that’s right,” he said.

His colleague Hendel said that  Alter triumphs as both a translator and critic. “His work on reading the Bible is going to be as long-lived as his translation. They’re works of genius,” Hendel said. “They’re going to be a part of his long-term legacy as much as the translations.”

Alter is comfortable with that. “A friend of mine once said to me that the shelf life of a book of literary criticism is six or seven years. But The Art of Biblical Narrative has been in continuous print for 37 years,” he said. And surely an entire translation of the Bible will be in play at least as long.