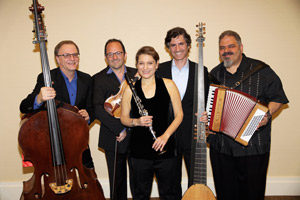 ALBANY– The University at Albany Performing Arts Center, operating under the auspices of the College of Arts and Sciences, will present the Big Galut(e) quintet on Thursday, Feb. 22, at 7:30 p.m. The quintet includes Robin Seletsky, Sasha Margolis, Michael Leopold, Mark Rubinstein and Richard Sosinsky who met during summer stints at the Glimmerglass Opera Festival. The program will feature traditional Yiddish tunes, Hungarian dances, klezmer originals and music by Gershwin and Rodgers and Hammerstein.

Clarinetist Robin Seletsky is a multi-faceted performer with interests in the classical music world as well as folk and avant-garde styles. She is equally at home in the klezmer style. Seletsky is an adjunct instructor at SUNY Oneonta and Hartwick College.

Sasha Margolis is a violinist, author, composer and arranger, and sometimes vocalist. Margolis was concertmaster for U.S. premieres of little-known operas by Janacek, Bellini and Donizetti, also playing and acting in Mauricio Kagel’s La Trahison Oral. As a chamber musician, he has collaborated with the Pittsburgh Symphony’s Andres Cardenes and Ann Williams, the Maia Quartet, members of the Corigliano and Pro Arte Quartets, and has played as a guest member of the Arianna Quartet. While a student at Oberlin College, he performed the Berg Violin Concerto with Robert Spano conducting.
Margolis’ klezmer-themed novel The Tsimbalist was published in February 2016.

Richard Sosinsky is a chamber musician,  and a orchestral bass player with jazz and new music groups.  As an orchestral player, he is a member of the American Composers Orchestra, Brooklyn Philharmonic and Riverside Symphony. He performs with American Ballet Theater, New York City Opera and Glimmerglass Opera.

Michael Leopold performs both as soloist and accompanist and has played with a Italian early music groups. He has collaborated with orchestras and opera companies including San Francisco, Los Angeles, Houston Grand, Washington National, Glimmerglass, Chicago and Portland Operas.

Mark Rubinstein’s main instrument is piano, but he has played drums in punk bands, electric bass in salsa groups and accordion in settings ranging from symphony orchestras to avant-garde theatre pieces.

Reservations and information may be obtained at 518-442-3997 or the Performing Arts Center website at www.albany.edu/pac.