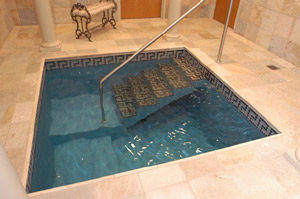 An example of a mikvah.

By JOSEFIN DOLSTEN
NEW YORK CITY (JTA) – A Jewish community mikvah organization near Boston says its supporters are rallying after announcing that a former staffer misused funds and engaged in other financial improprieties.

In an email sent May 18 to supporters of the Mayyim Hayyim Living Waters Community Mikveh, officials of the mikvah said the estimated financial loss was “significant” but “thankfully not enough to endanger the organization or our ability to serve our guests.”

In a phone conversation with JTA, Executive Director Carrie Bornstein was vague about what the former employee had done, saying divulging further details would harm the ongoing investigation by Newton Police and a private investigator. She said the employee had engaged in the improprieties for approximately two years.

However, Bornstein did not shy away from speaking about the shock she and other staff members felt at the discovery.

“[It was] a feeling I can’t describe,” she said. “Our staff is a very small, tight-knit, close, family-like kind of staff, and it was shocking to see that somebody who was part of this extended family in that way could have done something like this.”

The organization has a staff of seven and a 2018 budget of approximately $840,000, according to Bornstein.

Mikvahs, or ritual baths, are fixtures in Jewish communities, where women go for immersion after menstruation, among other rituals, and converts to Judaism immerse as part of the process. But since its founding in 2004 Mayyim Hayyim, which is not affiliated with any particular denomination of Judaism, has set out to make the mikvah rituals appealing to a wide swath of the Jewish community.

Its founding president, Anita Diamant, author of the novel The Red Tent, had said she wanted the mikvah to be a place for “brides and mourners, those celebrating a happy milestone, such as becoming a grandparent, and those suffering losses, such as miscarriage or mastectomy.”

Recently, Mayyim Hayyim was included for the 12th time in the Slingshot Guide of “the most cutting-edge, innovative programs” in Jewish life.

In July, Bornstein discovered something was not quite right with the organization’s financials. The situation pertained to an employee who was in the process of leaving the organization after 2 ½ years there.“It was clear that there were things going on that were problematic, to say the least, and that this person went to great lengths to cover up what was happening, “ Bornstein said.

A few days later, Bornstein contacted police and hired forensic investigators to look into the incident.

About a week after she made the initial discovery, she sent the e-mail to supporters along with Board chairwoman Sheri Gurock and Diamant, now the founding board chairwoman.

In her e-mail, Bornstein urged donors who had used credit cards to check their statements for irregularities, but she told JTA that it was just a precaution and that there were no indications at present that donors’ information had been compromised.

Bornstein, who has been in her position for six years and with Mayyim Hayyim for 10 years, said there were no indications prior to last month that the former staffer, who oversaw accounts payable and receivable and managed the organization’s office space, was acting inappropriately.

A Newton Police spokesman, Lt. Bruce Apotheker, said the department did not comment on ongoing investigations.

Bornstein said she made the decision to reveal the incident in the e-mail  because openness was one of the organization’s values. Since sharing the news, Mayyim Hayyim has received support from donors, other Jewish groups and the wider community, she said.

“As upsetting as it has been to go through all of this, our community has really been just so supportive, and that part feels family-like, too. We’re going to get through this and move forward together,” she said.

Episcopalian clergywoman apologizes for slander and vilification of Israel
Amy Siskind has been called a face of the anti-Trump resistance. Liberal critics claim she is an impostor.