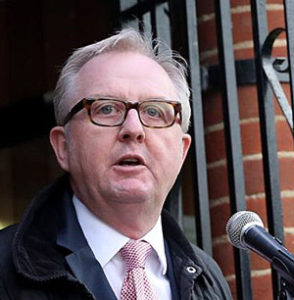 (JTA) — Britain’s Labour Party will not discipline a lawmaker accused of “screaming abuse” at party officials during a debate over how the party is dealing with anti-Semitism.

Labour lawmaker Ian Austin, the adopted son of a Holocaust survivor, was reprimanded and warned about his future conduct, the BBC reported on Tuesday, citing unnamed Labour sources. Austin said in a statement that the party’s general secretary told him in a letter that he would face no further action in connection with the July episode.

Austin said he had a “heated discussion” with Labour officials during the debate about the way the party defines anti-Semitism, but denies their claim that he “screamed abuse” at party chairman Ian Lavery.

Austin condemned the party’s decision, at the time, to reject portions of a working definition of anti-Semitism by the International Holocaust Remembrance Alliance. The decision was later reversed.

“I make no apologies for being upset about anti-Semitism. I think every Labour Party member ought to be angry about racism and the failure to deal with it properly,” Austin told the BBC. “But I did not scream abuse, as was alleged, so I am pleased the Labour Party have dropped its threat to hold an investigation.”