British K butchers ‘work overtime’ to fulfill meat demands for Passover; they are escalated by virus 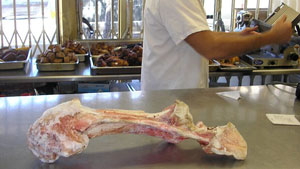 Meat at a kosher butcher. Photo courtesy of Wikimedia Commons

(JNS) – Butchers in the United Kingdom are hustling to meet an unprecedented demand for kosher meat in light of the many canceled Passover trips due to the coronavirus pandemic, the Jewish News reported.

Sarah Mann Yeager from the British company Louis Mann & Son said local butchers are “already stretched to capacity on Passover.” She estimates a 20 percent increase in demand because of how COVID-19 has impacted travel plans for Passover, which is celebrated this year from April 8 to April 16.

“We are having to work overtime, bring in extra staff, and there are added pressures to the market due to the lockdown,” she said. “We will do our best to meet demand so long as there are no problems in supply.”

Suppliers could also face problems because “there are only a finite number of kosher abattoirs” in the United Kingdom, and “if one person catches the virus, it could have severe consequences,” she said.

Tamir Haziza, director of the butcher Menachem’s in Golders Green, a heavily Jewish neighborhood of London, is also “concerned” and has had to readjust his supply because “basically everyone is staying.” He said “we are buying more meat every day to try to make sure people get what they want.”

The butchers also encouraged people not to do their Passover shopping at the last minute.“I don’t want people to be disappointed. I encourage people to do their shopping ASAP,” said Haziza.

Mann Yeager encouraged customers to “get moving as soon as possible,” but also “to behave in a sensible manner” and “not to panic-buy.”

I chose a boy over Passover. Surprisingly it brought me closer to Judaism.
A Jewish day school is now a medical face shield factory