Bud Selig inducted at the National Baseball Hall of Fame 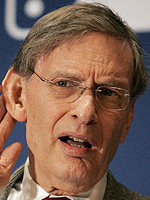 COOPERSTOWN– The annual National Baseball Hall of Fame induction ceremony was recently held in Cooperstown under a cloudless sky at the Clark Sports Center.

Jeff Bagwell, Tim Raines, Iván Rodríguez, John Schuerholz and Bud Selig were inducted in front of 50 returning Hall of Famers and a national television audience on MLB Network as 27,500 fans basked in the brilliant sunshine.

Selig, who spent 22 years on the Induction Stage as baseball’s commissioner, said, “I am deeply honored to receive baseball’s greatest honor. It really has been a remarkable journey. What you’ve seen here today is a little boy’s dreams come true.”

According to Wikipedia, Allan Huber “Bud” Selig,  born  July 30, 1934 is an American baseball executive who serves as the commissioner emeritus of baseball. Previously, he served as the ninth commissioner of baseball. Selig retired at the end of the 2014 season.

He oversaw baseball through the 1994 strike, the introduction of the wild card, interleague play, and the merging of the National and American Leagues.

During Selig’s term of service, the use of steroids and other performance-enhancing drugs became a public issue. The Mitchell Report, commissioned by Selig, concluded that the MLB commissioners, club officials, the Players Association, and the players all share “to some extent in the responsibility for the steroid era.”

As a Milwaukee native, he is credited for keeping baseball in Milwaukee. In 1970, he purchased the Seattle Pilots in bankruptcy court and renamed them the Milwaukee Brewers after the minor league team of the same name he had watched in his youth, which existed until the arrival of the Braves in Milwaukee in 1953. The Brewers went to the 1982 World Series and won seven organization of the year awards during his tenure. Selig remains a resident of Milwaukee.

Selig, who grew up in Jewish, and his family served a supportive role on the advisory board of the Israel Baseball League during its inaugural season in 2007.

Jared Kushner on Israeli-Palestinian peace: ‘There may be no solution’
Have We Learned The Lesson Of Tisha B’Av?